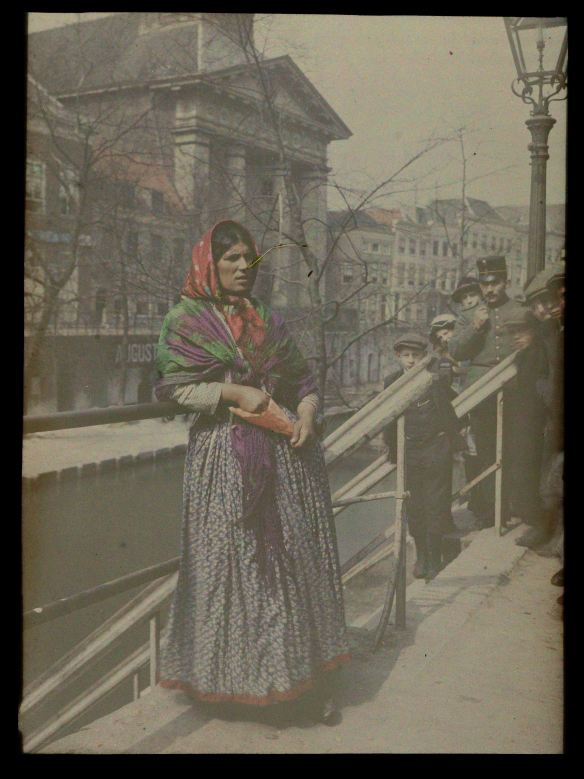 I originally came across this photo on Pinterest and it caught my eye for multiple reasons. Obviously, unlike many of the old photos I usually use for these Then and Now posts, this one focuses more on an individual than a building or setting. The woman, a gypsy (zigeunerin), is the main subject of the image taken by Belgian autochromist Sebastiaan Alphonse van Besten. Van Besten was a refugee here in the Netherlands during World War I and took photos in various cities throughout the country, including this fantastic photo here in Utrecht. This particularly image now hangs in the Rijksmuseum in Amsterdam. I look forward to seeing it in person soon.

There are still gypies/travellers/roma, etc. in Utrecht and the Netherlands in general, but not quite so obvious now. However, the setting is barely changed. She stands just to the side of a set of stairs that lead down to the wharves along the Oudegracht and the St. Augustine Church in the background remains seemingly unchanged. Even the handrails of the stairs seem almost the same. Now, though, there are more parking signs and bicycles along the railing. In fact, if it weren’t for the bicycles, I could have stood in almost the exact spot to get my “now” photo.

FYI, the photo I posted for my last Wordless Wednesday was taken almost directly underneath this spot, down on the wharf level.

6 thoughts on “Time Travel: St. Augustine’s on the Oudegracht”