No, this isn’t me with no filter complaining about Amsterdam getting all the attention. Utrecht’s starting to get enough attention, especially with the upcoming Tour de France. No, this is me highlighting a few of my photos of Amsterdam without any filter or fussing about with post editing.

I was recently contacted about participating in London City Airport’s #NoFilter project. As they point out, with the wealth of high-quality point-and-shoots, as well as the increasing capabilities of smartphones, travel photos are easier than ever. Yet so often, people use a variety of filters on their photos, rather than letting the image stand on its own. Sure, there are times when we all use a few filters to fix a quick snap that didn’t turn out quite so well. Yet with practice and some helpful tips, you’ll find that there’s no reason to add a filter to every photo. Let the true beauty of the image speak for itself.

Admittedly, I haven’t spent that much time in Amsterdam, especially just wandering around taking photos of things that catch my eye the way I do here in Utrecht. I tend to go to Amsterdam most frequently for concerts at Melkweg or Paradiso or to hit up one of the museums, including the Van Gogh Museum and of course, the Rijksmuseum. However, in looking through my photos, I realized that because I am there so often in the evening, I thought I’d highlight a couple of my night shots of some quintessential spots, and throw in a few night photography tips. 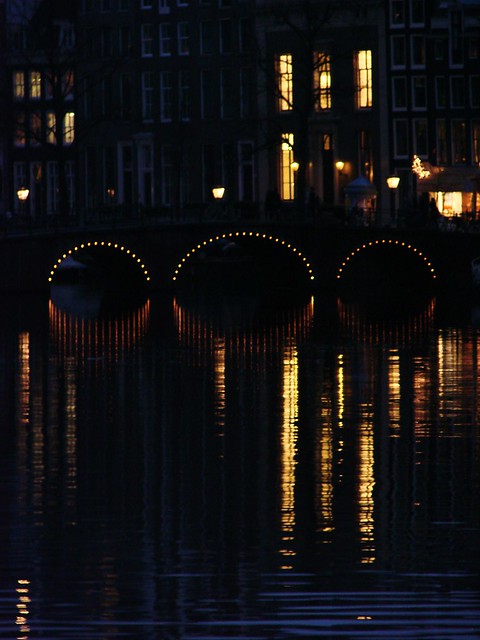 You can’t go to Amsterdam without getting at least one canal shot. Fortunately, low light doesn’t mean you’re out of opportunities. Many of the arches in the bridges are lit up in one form or another, and street lamps and building lights reflected in the water create some fantastic mirror-like shots.

It was on a family trip to London years ago that my dad (formerly a professional photographer) shared a few night-time photography tips with me that have stuck in my head. When you’re working in low light, your camera aperture will need to stay open for longer to get enough light in to create something other than a solid black picture. However, with that long exposure time, any movement of the camera is going to give you a blurry image. If you don’t have a tripod (and who wants to lug one around on their travels), you need to use your body as a tripod to create as still a base as possible.

Even the steadiest of hands are bound to wobble a bit, especially with a lightweight smartphone. Regardless of the type of phone you have, try to find a solid surface, be it wall, street lamp, or bridge railing that you can steady yourself against. Use both hands to hold the camera and try to plant your upper arms and elbows tight against your body, creating your own tripod, in a sense. And for the piece de resistance, take a deep breath and hold it, right before you’re ready to take the photo. The extra breath will further solidify your upper body, making you less likely to wobble when you press the button.

While in Damplein on one visit during the winter holidays, I enjoyed taking in the hustle and bustle during rush hour in the evening, set amid the festive Christmas trees and the historic buildings, including one of the royal residences. But even amid all of the people passing by, there were areas of the square that weren’t as heavily populated. By looking around — and moving around — you can find yourself with a shot that belies the madness surrounding you. 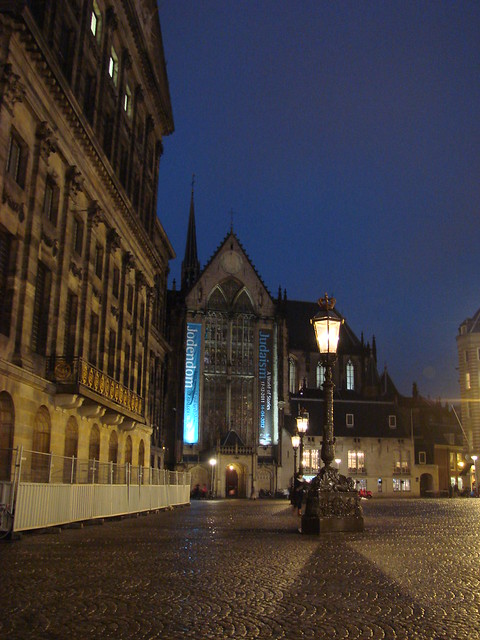 In this shot, the architecture was what first caught my eye (that’s one of the royal residences on the left), but then I noticed the patterns in the ground and the shadow of the lamp post. I also liked the blue of the banners pairing with the blue of the evening sky, and the gold of the building pairing with the gold of the lamp light. To get the shot, I leaned up against one of those lamp posts to create my steady base.

With the longer exposure, you can get fairly clear images of anything standing still, but any movement will blur. With the mass of people passing back and forth, that blur can add a sense of motion to an otherwise static image of a building, including the Bijenkorf, a grande dame of department stores. In other words, don’t be afraid to embrace a bit of blur. 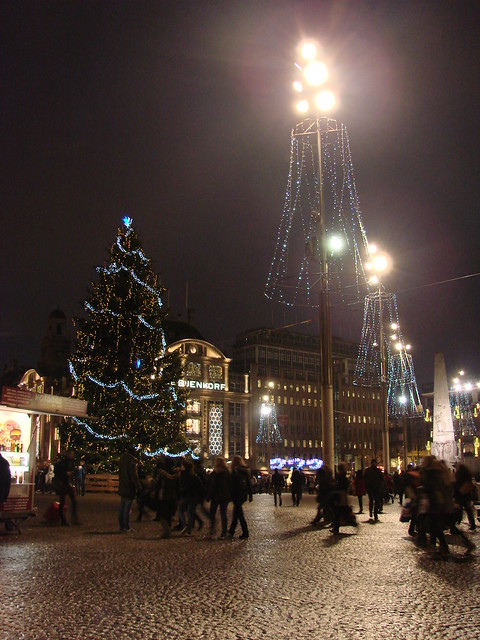 The thing is, as I’ve gone through my Amsterdam photos to find some to feature, and as I’ve thought about tips for getting good shots, I’ve found plenty of things I want to fix in all of these photos. However, I’ve also had more practice taking evening shots since then and have learned from some of my mistakes.

Give yourself extra time to get good evening shots. You’ll have to think more about your light sources and finding a way to give yourself a steady base. Even if you don’t have a lamp post or building to steady yourself against, borrow a travelling companion’s shoulder, if nothing else. You’ll be pleasantly surprised at how much better your shots turn out.

But even if you do just grab a few quick snaps on the go — and you’ll find plenty to catch your eye in Amsterdam — embrace the blur and the not-so-perfectly framed shots and remember that not every photo has to be gallery perfect. All of those less-than-stellar shots should still serve as valuable personal memories of a trip to a truly fun city.

In my case, I know these photos aren’t going to win me the #NoFilter competition, but I’m sure judge Duncan Rhodes from The Urban Travel Blog will have plenty of spectacular photos from which to choose. Do check out #NoFilter on Twitter and the other sites linked to see some of my fellow travel bloggers photos and tips.

7 thoughts on “Amsterdam with #NoFilter”