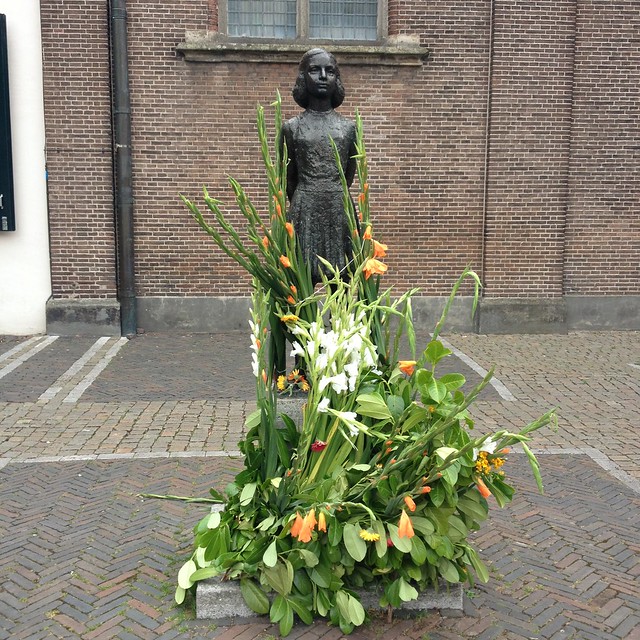 As is so often the case on Sunday mornings, the day after the large flower market in Janskerkhof, the statue of Anne Frank is awash with flowers placed in remembrance. This particular Sunday saw an extra large display. 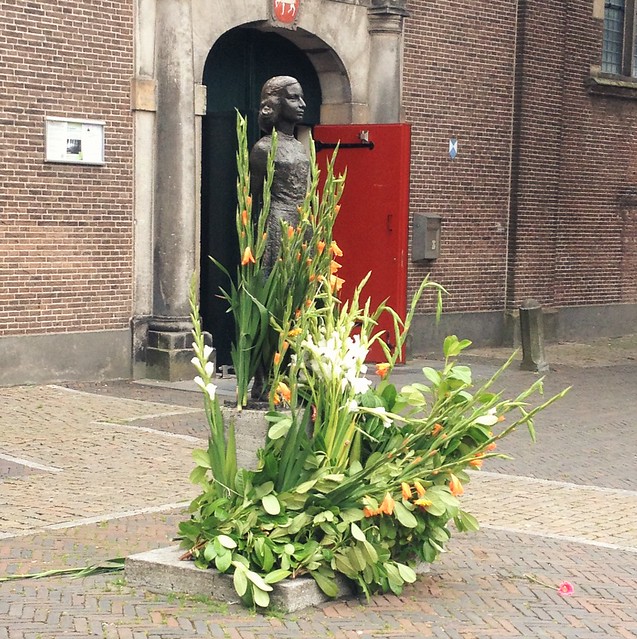 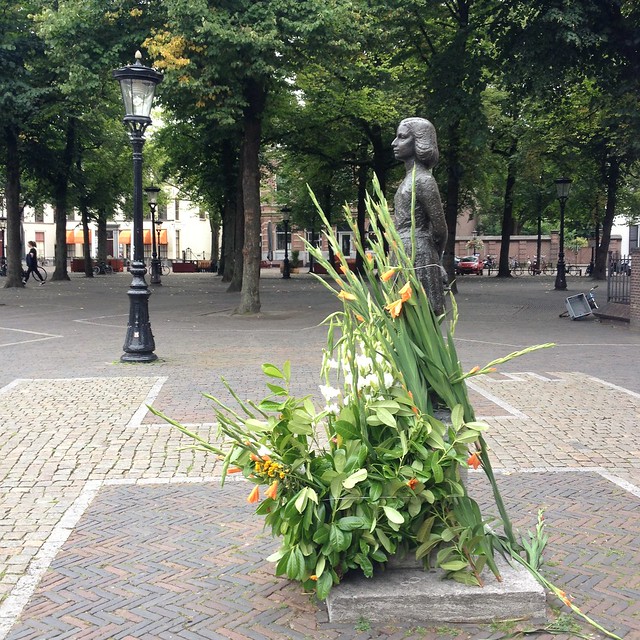 We were up and out early this morning — to the point that we were home by 9:30am — but I snapped a few shots along the way and thought I’d share a few sights from our morning outing. As I mentioned previously, yesterday was Dodenherdenkingdag (Remembrance Day) here in the Netherlands, so it was no surprise to see the statue of Anne Frank that stands in Janskerkhof adorned with flowers. She usually has at least one bunch of flowers, especially on Saturdays, since she stands next to the flower market, but there were many more this particular morning.

We were headed to the Saturday market at Vredenburg to pick up some fish and along the way I noticed this building. It was the old signage that particularly caught my eye. The building obviously used to be a butcher’s shop (slagerij) selling rund, kalfs en varkens (beef, veal and pork). Now it’s about to become a Swatch store.

Next to the Vredenburg market is the Hoog Catharijne, a gigantic mall. They recently opened up a pop-up expo featuring 3D photos of old Utrecht. The stores in the mall weren’t open yet, but it turned out that we could take advantage of the expo, since they had the “glasses” printed on the windows so you could peer through and see the photos. There’s a larger, full expo at the Utrechtse Archief, which I’d like to go see.

We also saw some guard dogs (the hondenbrigade) at Neude, where they’ve set up some strange buildings, but my photos didn’t turn out that well. Does anyone know what that hodgepodge of buildings in Neude is? It seems a bit early for the Festival a/d Werf.

Last week, Jane posted about a visit to the city center, particularly the part I know so well. One of the things she commented upon was the statue of Anne Frank that stands in the Janskerkhof. The statue was created by Pieter H. d’Hont in 1959, and put in place in 1960 as a memorial to all who were persecuted during World War II. 1960 was also the year that the Anne Frank House officially opened.

As I mentioned to Jane in her comments section, the statue is usually decorated respectfully with flowers. The statue stands next to the site of the Saturday bloemenmarkt (flower market), so there’s an easy source for the flowers. However, I think a nearby elementary school also looks after the statue. Of course, the locals are just as likely to keep an eye on it. The Dutch take the story of Anne Frank quite seriously and even the statues dedicated to her are usually treated with great respect and reverence. In 2007, Anne Frank was officially included in the Canon of Dutch History, ensuring that her story would be taught in primary and secondary schools.