A few weeks ago, I posted about the “pop-up” bicycle parking that can be found at certain spots on the weekend. Now there’s going to be more designated bicycle parking around typically busy and popular spots. Beginning October 1, the gemeente (municipality) will begin a three-month trial of special bicycle parking. Designed to provide a safe and secure spot for short-term parking, the goal is to reduce the number of wildgeparkeerde (wild parked) bicycles that you see everywhere, while still encouraging people to bike, rather than drive, in the city.

The five test sites are located at:

Speaking of bicycles, I was approached by Expatica a while back to participate in a blog contest they’re holding to culminate at their annual I Am Not A Tourist Expat Fair. We were to send in one of our favourite/most popular blogs. I decided to send in one I did about how difficult it is to make a forceful statement at the end of an argument when you have to bike away, rather than drive off. You can read the post again — and vote for me — at the official blog contest web page. 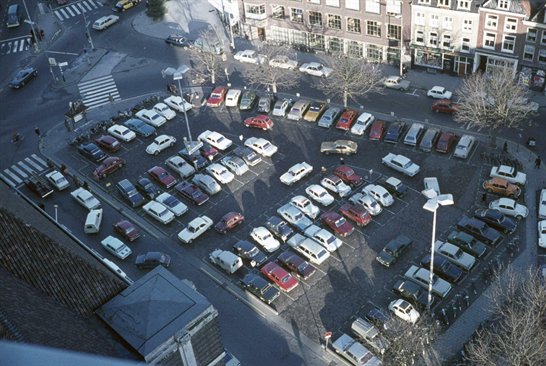 (photo via the Utrechtse Archief)

This is a bit of a variation on the Time Travel posts. Usually, I post an old photo and compare it with a new one, showing how little has changed. In this case, however, there’s quite a difference. Although I suppose you could say that the more things change, the more they stay the same. It’s all a matter of perspective.

In this case, the photo above is a great aerial view of Neude, one of the big squares in the middle of town. This is where the old post office is located, and where many of the festivals set up temporary housing. There’s almost always something going on at Neude, even if it’s just the cafés setting up extra seating. The aerial photo was taken from the Neudeflat on the top of the tall building in this next picture. The big brick building is the former post office.

You’ll notice that the aerial view showed the square being used for parking. I think that was common through the 1980s, perhaps even later. However, as cars became less welcome in the city center, and as bicycles became even more prevalent, there’s been a shift in how Neude is used.

The use of Neude has certainly changed since that first photo. Yet, as I said, the more things change, the more they stay the same. You see, on Saturdays and shopping Sundays, there is once again parking on the Neude, but this time it’s bicycle parking.

Each weekend, these mobile bicycle parking lots are set up by the city in various locations around town to give people somewhere safe to park their bicycle for free. This allows people to bike into the center, park their bike and then go on foot to do their shopping, etc. It also means that the regular bike racks aren’t further packed, making it difficult for everyone. It also keeps the city a bit tidier, since you don’t have the same volume of bikes parked in random spots. Trust me, they’re still everywhere, but these fietsenstalling always seem to be in full use when they’re set up.