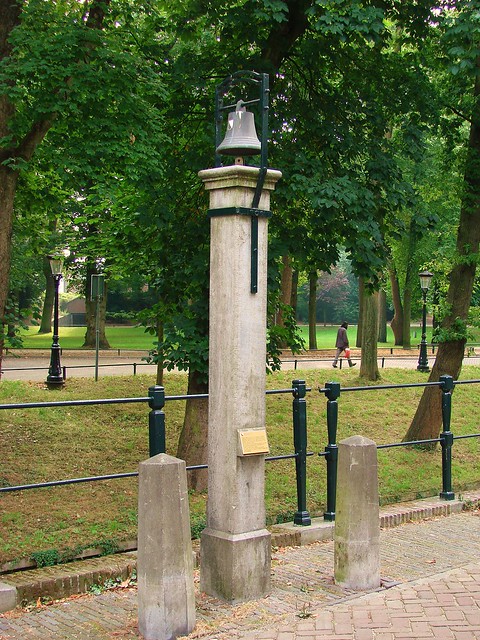 The other week, I wrote about a former fire house that dates back to the 1860s. With buildings so closely packed together, it was vital to have a number of these fire stations spread strategically throughout the city. But when your fire truck relies on literal horse power and there are no mobiles that allow anyone to quickly dial 112 (the emergency number) if they spot suspicious smoke, an effective alarm system is vital.

Obviously, in the days before telephones, it was important to have a way of alerting people that there’s a fire. As well as warning neighbours who may be at risk, the firefighters needed to be alerted, as well. One way that was done was through the use of a brandbel (fire bell). Just like the fire stations, they were set up a various locations throughout the city. The bells, some of which came from demolished 17th century cloisters, stood atop wood or stone posts. In case of fire, ring bell.

The firefighters would hear the bell (or be alerted to it) and then head out to the fire. I assume that as someone rang the bell, someone else might run over to the station to alert the firefighters as to the specific location. The bell would at least give them time to get their gear ready while someone else sprinted over.

On 3 March 1921, a telephone alarm system was put in place and by 1935, the last of the fire alarm bells were gone from the regular city landscape. The one in my photo is down by the southern end of the Nieuwegracht and is a replica of one that would have served the Schalkwijkstraat fire station I mentioned in my previous post. It’s nice to have these little reminders of days gone by, but it certainly makes me thankful for modern improvements!