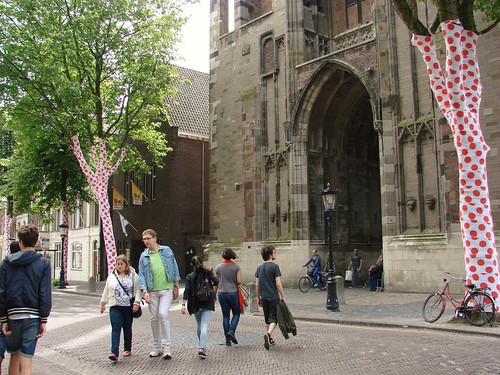 In about an hour, at 12:30, there will be a special cycling/France-themed Domtoren concert. With the Tour de France ready to start tomorrow, the theme is obvious. Carillonneur, Malgosia Fiebig, will be performing a fantastic set list that includes Tom Waits, Queen, and Kraftwerk. You can find the full set list here. As always, you’ve got to love it when a bell tower dating back to 1382, and a carillon dating to the 17th century, performs modern music. Kraftwerk! On a carillon! Brilliant!

I hope all of the visitors who have begun to arrive take notice and enjoy the concert. That moment when you’re wandering through the city and realize what you’re hearing is bound to put a smile on your face.

The Domplein and other squares throughout the city are set up with large screens for viewing the events this week, and of course, there are lots of decorations, including the tree trunks wrapped in Tour de France jersey-themed colors. The white with red polka dots is kind of funny, since it’s for the King of the Mountain and, well, this is a very flat country. There is that one slight hill over by Park Lepelenburg where they had the team presentations last night … 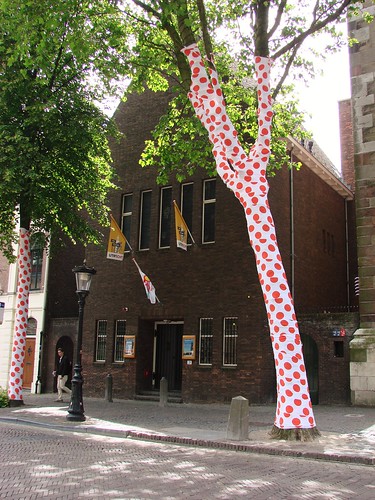 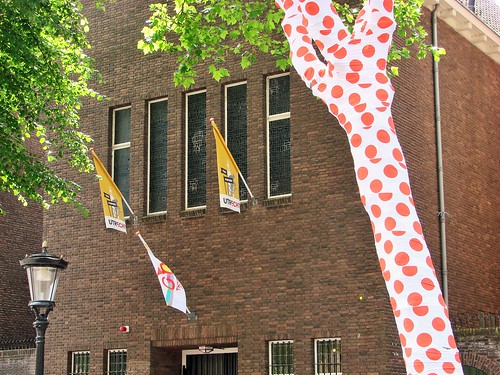 I wonder if the Domtoren made of bicycle parts is on display anywhere. I saw it this past December and thought it was brilliant. 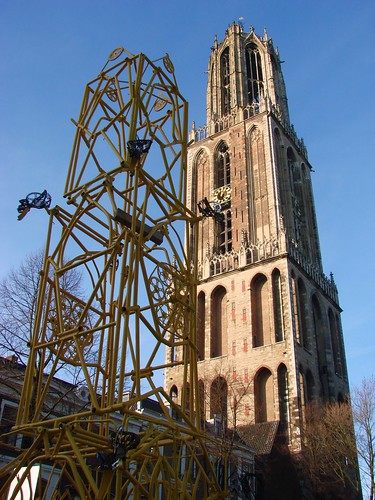 The summer Domtoren concerts (zomeravondconcerten) start up again tomorrow evening. Every Monday at 20:00, guest carilloneurs and other musicians, as well as Utrecht’s resident carilloneur, Malgosia Fiebig, will perform a variety of musical pieces.

The music can be heard throughout the old city center without much trouble, but for a particularly good listening spot, you can head to the cathedral’s Pandhof. Each week has a different musical theme, with tomorrow’s inaugural concert featuring operatic pieces by Verdi and Mozart.

You may remember that last year they performed Tubular Bells for the closing concert of the series. This year’s finale will be no less spectacular, as the musicians perform an adaptation of Pink Floyd’s The Wall.

Last night was the last of the Domtoren carillon summer concerts. To close out the series, carillonneur Malgosia Fiebig, along with pianists Sandra Mol, Jeroen van Veen, and Marcel and Elisabeth Bergmann, performed Mike Oldfield’s classic Tubular Bells. Even if you’re not familiar with Mike Oldfield, you’re probably familiar with the part of Tubular Bells that was used in the horror film classic The Exorcist.

The concert, since it’s performed in the Domtoren, is easy to hear throughout much of the city center. Knowing we can hear the Domtoren during its hourly musical interludes, G and I decided to listen to the concert from our back terrace. Unfortunately, we forgot to account for all of the neighbours around us, who were all eating dinner, watering plants, having phone conversations, and generally making the most of the nice weather. Still, we could hear all but the quietest bits and it really was wonderful to hear it played on such an instrument.

I didn’t realize at the time, but they had seating set up at the Buurkerkhof so that people who enjoy the concert. In addition, they projected on a wall in the square a video image of the musicians performing.

Per the short YouTube video of the concert that I found comes the following trivia:

The pianos were amplified using speakers pointing in four directions at a height of 40 meters (the sound you hear comes from the tower and was heard throughout the city!). The performers were playing in a small room at a height of 70 meters.

I didn’t get any video, but fortunately, others did. Here’s a link to a short section of the concert, and below is another short version of various sections of the concert. Enjoy!

Any excuse to post a picture of the Domtoren …

Today’s midday musical interlude was an homage to The Rolling Stones, as played on the carillon of the Domtoren. I was walking through town to meet up with a friend and got to enjoy some of the music. I heard Start Me Up and Ruby Tuesday, but they also played Wild Horses, Satisfation, and Angie. “Aaaaaaaaaaaaangie!” Sorry, I can’t even see that song mentioned without singing along dramatically. I suspect it might have had something to do with one of my friends at university having the name Angie. “Aaaaaaaaaangie!”

If you’re not sure what a carillon is, here’s the Wikipedia description, which is probably a more succinct explanation than I could provide:

A carillon (/ˈkærɨlɒn/, /ˈkærɨljɒn/, or /kəˈrɪljən/; French: [kaʁijɔ̃]) is a musical instrument that is typically housed in a bell tower, or the belfry of a church or other municipal building. The instrument consists of at least 23 cast bronze, cup-shaped bells, which are played serially to play a melody, or sounded together to play a chord. A carillon is played by striking a keyboard – the keys of which are sometimes called batons – with the fists, and by pressing the keys of a pedal keyboard with the feet. The keys mechanically activate levers and wires that connect to metal clappers that strike the inside of the bells, allowing the performer on the bells, or carillonneur, [1] to vary the intensity of the note according to the force applied to the key.

Thanks to Twitter, I discovered a bit about Malgosia Fiebig, who is now serving as the city carilloneur for Utrecht and Nijmegen, having taken over the position from Arie Abbenes, who retired last year. She’ll be the one performing Tubular Bells at the end of the summer.

Still, there’s nothing like walking down the street, cursing the rain, when you suddenly realize that you’re hearing “Start Me Up” being played on bells ringing out over the city from the bell tower built in the 1300s. That’s one of those random things that I just love about living here. Rock on, Domtoren!