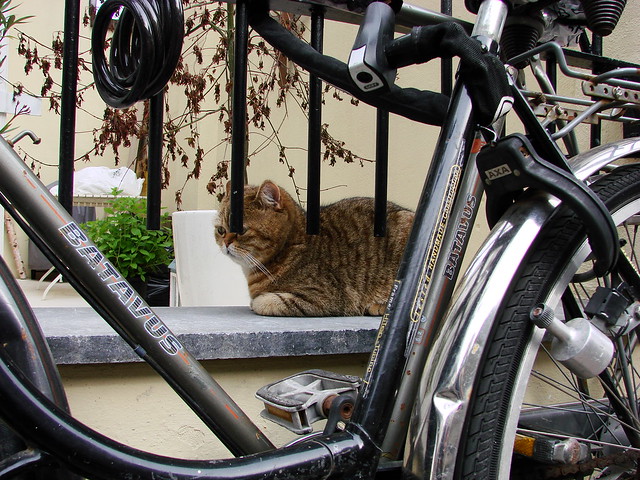 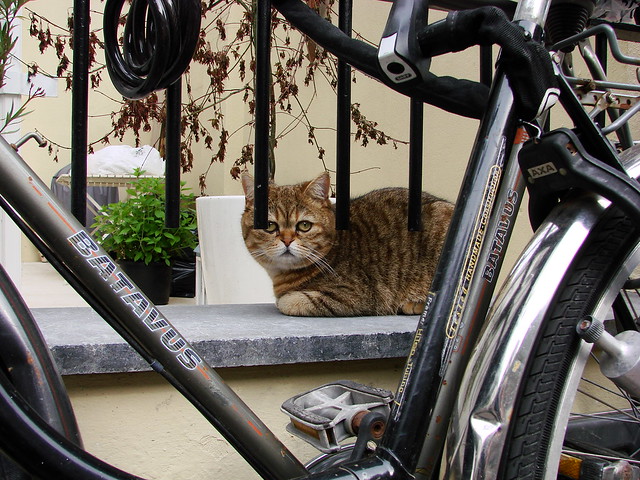 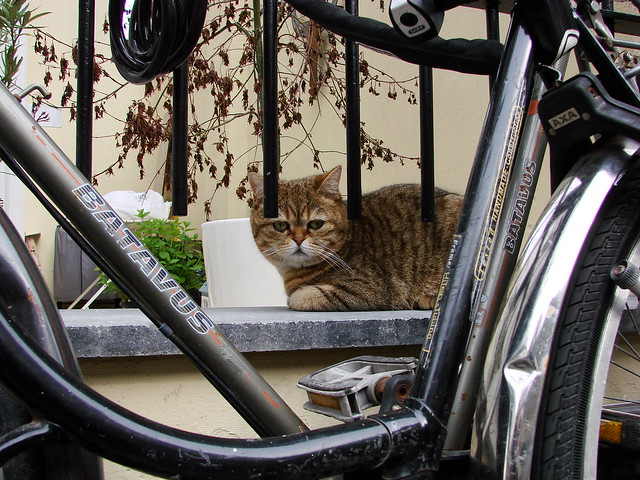 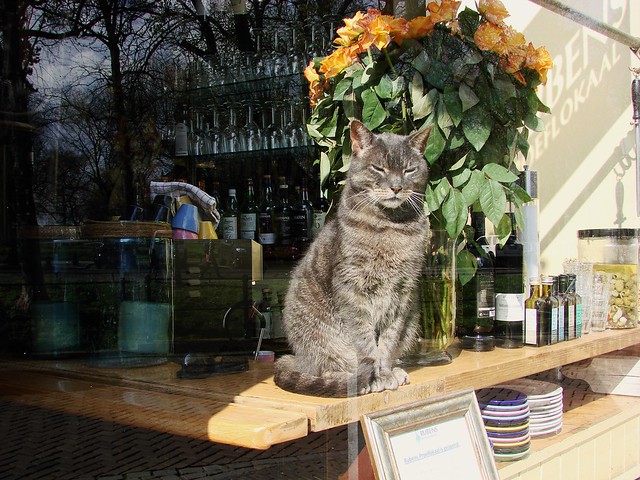 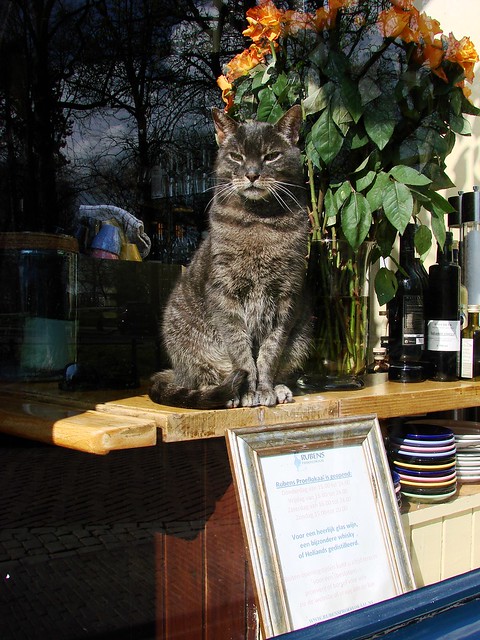 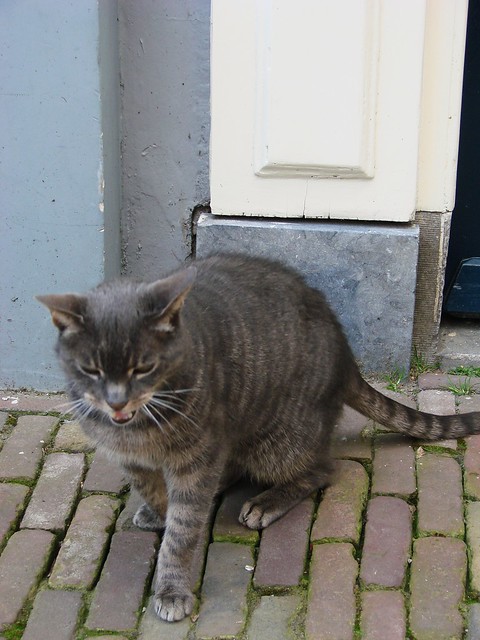 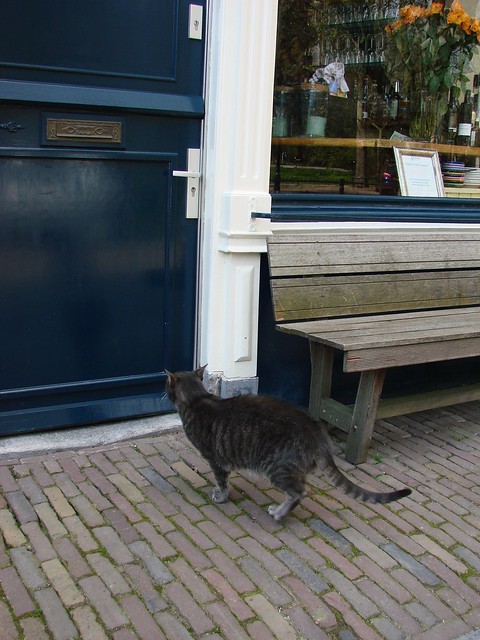 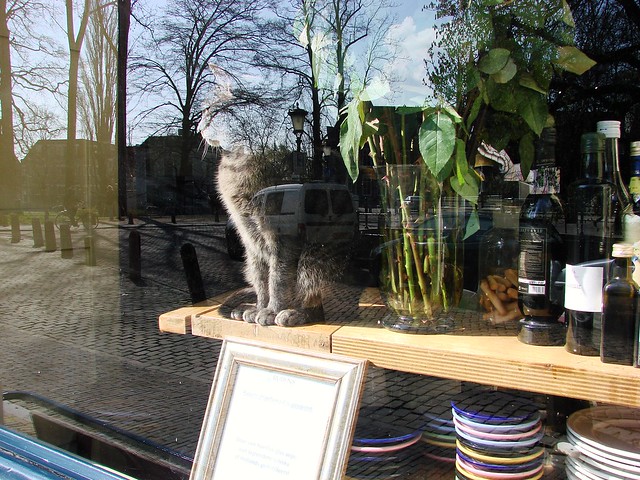 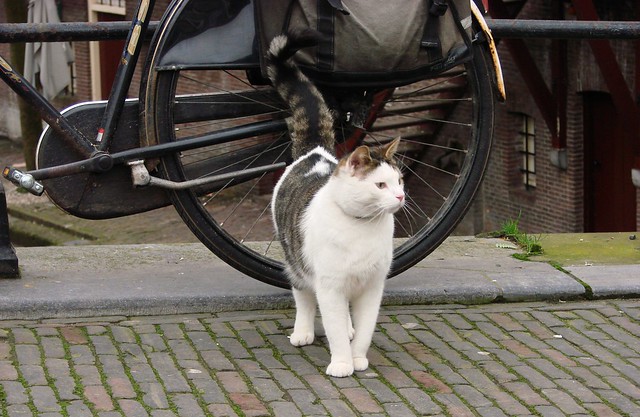 Cats and the internet are a match made in heaven, so when in doubt, blog about cats. Utrecht is full of beautiful cats, in front windows and out on the streets, so here are a few I’ve come across recently.

This first cat was hanging out by the flower vendors on one of the bridges across the Oudegracht. He was sniffing the bikes and tarps and rubbing against both, claiming them all. I think of this next photo as his “proud warrior” stance. 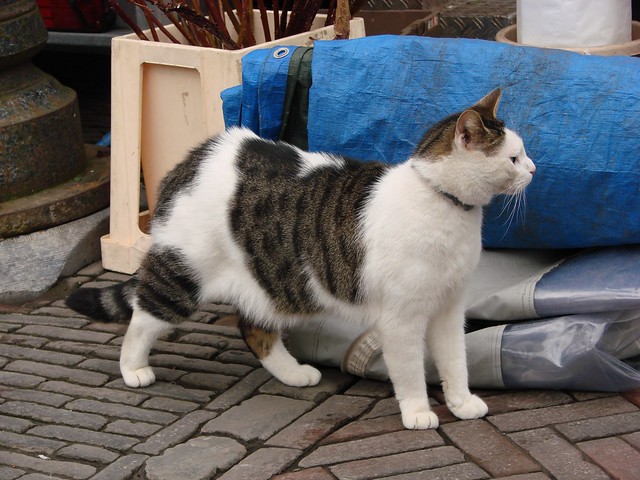 On my birthday, as we walked down Voetiusstraat, we saw one of our old cat friends. 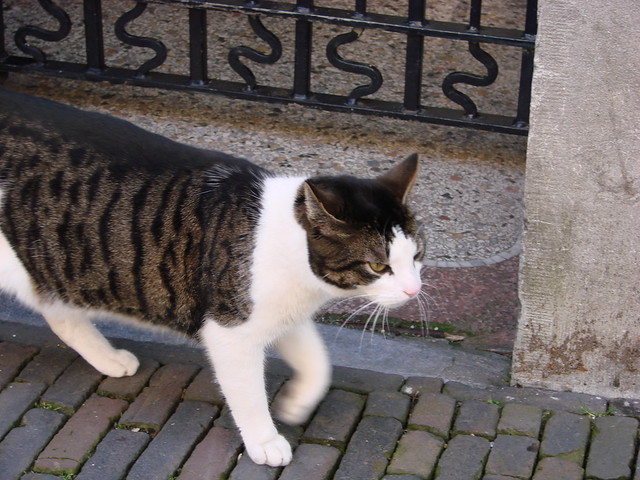 He was obviously busy and had places to go, but you can always count on him to come and say a brief hello, before heading off once again. I think he may have been going to try his luck at Carla’s for some tasty nibbles. 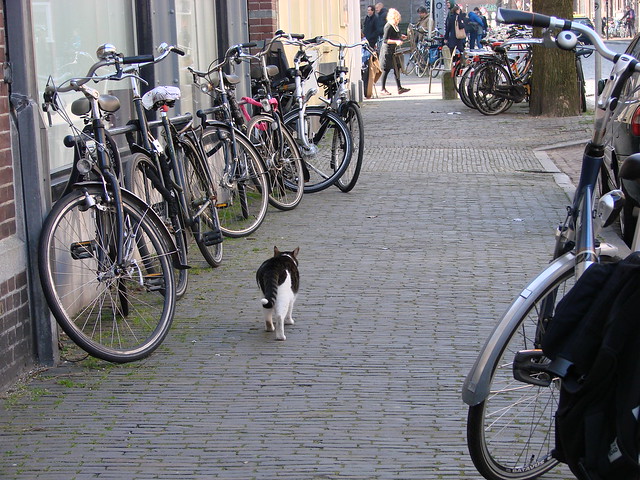 Speaking of tasty nibbles, Luna is making it clear that she would like some of her own now, thank you very much. When she gives me that look, I know it’s time to listen. Enough with posting about other cats, time to focus on my own! 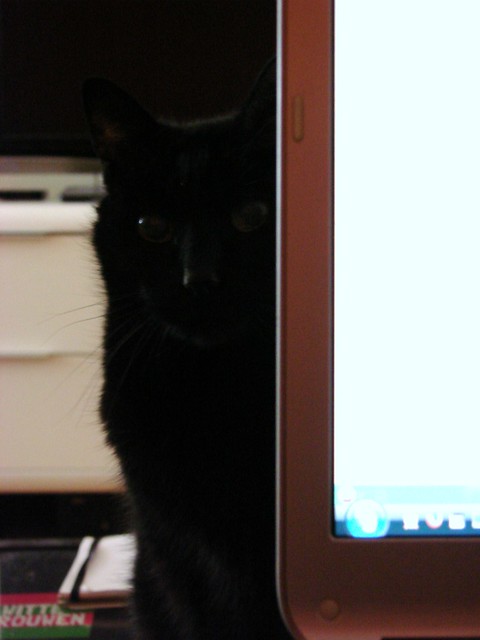 Needing to drop off some plastic recycling, which is further away than our regular recycling collection point, we decided to keep walking for a bit after our recycling duties were done. It was early on a Sunday morning with little else to do, after all.

It was a surprisingly nice morning to start, with lots of grey skies broken up by bright bursts of sunlight. With some of the trees still showing off their autumn colors, it really was a beautiful sight. Sadly, I haven’t sorted out my camera issues yet — and oh, the number of shots I would have loved to have taken today! — so I have no new pictures to share. You’ll just have to take my word that Utrecht was being its usual beautiful and quirky self.

As I hadn’t been over to the Domplein in two whole weeks, we decided to head in that direction as we walked up the Nieuwegracht. As we strolled along Achter de Dom, heading toward the cathedral, we noticed a cat following two women a few paces behind. Looking closer, I suddenly realized that I knew that cat! It’s the cat I used to see almost weekly as I would head to the Pandhof to take my gargoyle photos.

Best of all, the cat seemed to recognize us, as well, even from across the street. Spying us, he meowed and immediately crossed the street to come straight up to us, meowing the whole time. Despite knowing from past experience that this cat sets off my allergies, I couldn’t resist a quick pet as he rubbed against my legs.

Then he was off, with a final farewell meow as he went on his way. I hadn’t seen him in months and worried that he’d moved, as the antiques/art shop where he was often spotted had closed, so it was lovely to see him again.

It’s always nice to run into friends and acquaintances when you’re out and about. It helps to feel like you’re a part of a community. That applies equally to cats as to humans. Now excuse me, one of my cats is suggesting that now would be a good time for me to feed her, especially as I’ve been out carousing with other cats.

It’s a rare outing in Utrecht that doesn’t include the sighting of at least one cat. Whether it’s a cat comfortably curled up in a café or roaming the city streets, there’s no shortage of feline residents.

As I was walking along the Oudegracht this week, I saw an adorable dark grey cat among the mass of bikes parked at the Donkere Gaard. She was tiny and sleek and a bit more skittish than many of the local cats. Before I had much time to admire her, she’d taken off, weaving her way through the bikes. I was heading in the same direction and then turned onto the bridge to cross to the other side of the canal. As I was walking along the bridge and admiring the view, I saw the little cat again. She was on the edge of the street level, clearly readying herself to jump onto the nearby tree.

That’s what you see in the photo above. Look closely. She’s the blur racing up the trunk of the tree. Fortunately, I had my camera phone out, having planned on taking a photo from the bridge, anyway. She made the leap and quickly raced up the tree trunk to one of the overhanging branches, where she disappeared from view. Such a tiny cat, but such amazing speed and agility — and claws! I was actually glad she moved so swiftly, so I had less time to worry (needlessly).

If you look closer, you can see one leg clearly outstretched as she speeds her way upward. And yes, I was standing on the bridge over the River Kwai (restaurant).

While waiting for a friend last Sunday, I came across yet another cat who was making the most of the fine weather. Just lying there in the street — possible in large part because of the attempts to reduce cars in the city center — this multi-colored cat saw me and proceeded to roll, just like the cat the week before.

I haven’t done a Caturday post in a while, but last weekend we came across a particularly friendly cat while we were out and I’m so glad I had my camera. This adorable little girl saw us across the street and as soon as we stopped to admire her, she came running over and immediately starting rolling around, tummy up, for attention. Of course, with all that rolling, getting a good shot became more of a challenge. Fortunately, I managed to get a couple of cute ones for your enjoyment!

We saw a number of cats today while we were walking through town, and I managed to get some shots of most of them. The first one here is one that I’ve posted about before. S/he can usually be found in this exact spot and there’s a reason for it. Look closely at the next photo and you can probably figure it out.

I’m not sure if the cat can read and has simply been fooled or if the cover that I felt further down the street that said “warmte” just wasn’t as warm as the two the cat sits on. Regardless, s/he seemed to be smiling.

Lots of shops and restaurants have cats that live there, surely as extra insurance against any unwanted invaders of the furry kind. You will often see the cats hanging out in the front windows, people watching and probably soaking up any heat. I think this next cat was enjoying all the extra heat from the lamp displays. (This just in, a Twitter contact told me the cat is appropriately — for a light shop — called Spot.)

Finally, as distracting as the red shutters may be, if you look closely, you’ll see a cat down by the bicycles.

Admittedly, my two cats aren’t exactly the biggest cats, but this black and white cat was pretty big!

Fans of cats and Utrecht should also check out the book Kat in de Stad.

Also, if you’re an expat in the Netherlands and you brought a pet (of any sort) with you when you moved here, the author of Kat in de Stad and I are interested in getting in touch with you to include you in a book about expats and their pets. Get in touch with either of us if you’d be interested and your pet is still with you.