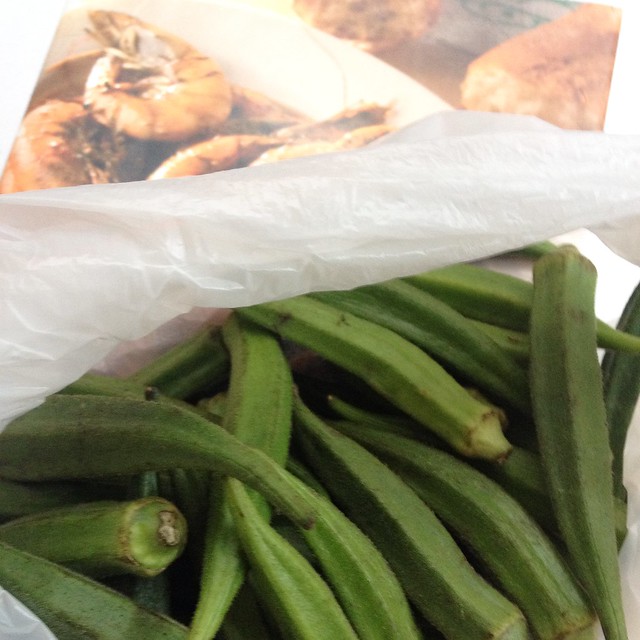 This morning, before lethargy and two jobs could distract me, Charlie and I headed out to the market at Vredenburg in search of some okra. I knew that there used to be a vegetable stall there that always had okra, but it has been a while since I’ve been to the Saturday market and I was worried they wouldn’t be there today. Fortunately, my concerns were soon allayed and I was in possession of a nice bag full of okra. And I only had to wrestle Charlie back to his sit position twice!

(Charlie is relatively well trained, but when he’s out in the world with lots of distractions, he gets a bit overwhelmed. I’m trying to get him more used to crowds and all the associated smells and such and he’s definitely making progress. I’m very proud of him!)

As for the okra, the reason I absolutely had to get some today is because I’m turning Vino Veritas into a Creole/Cajun restaurant for one night only on Tuesday, which happens to be Mardi Gras. This time of year, I always get nostalgic for my years in New Orleans and I’ve had a hankerin’ for some authentic gumbo. Since the Klein New Orleans event last summer was such a big hit (although I still question some of the recipes), I thought I’d host my own Klein Mardi Gras — on a much smaller scale, of course.

This has been a really last-minute decision, so I’m sadly short of purple, green, and gold decorations, but at least we should have some mighty fine food and a good Mardi Gras/New Orleans music playlist. I brought a small selection of some of my Mardi Gras beads with me when we moved, so maybe I’ll hang some off the cactus we have at work, in honor of the trees covered in Mardi Gras beads in New Orleans. We had one such tree right outside our dorm room freshman year. I have fond memories of sitting on the balcony and watching the plastic beads catch the light. 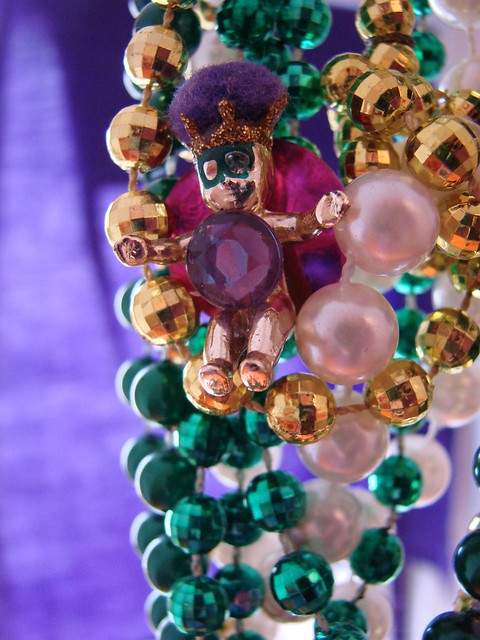 Oh, but the food! That’s what y’all want to know about! We’re going to be serving up gumbo, jambalaya, and shrimp etouffée, and I’m thinking about a marinated avocado and crab salad and/or a corn and black bean salad for starters. And if I can scrounge up some food coloring, I might be making mini king cakes for dessert. I’m getting hungry just thinking about it! And if you’re wondering, I have my own recipes, but also got some recipes from my friends from Louisiana, just to make sure I’m doing it right. Seriously, y’all. This is going to be the authentic taste. I guarantee! Ooo weeee!

(I had to throw that Justin Wilson link in. My grandpaw, who used to catch his own shrimp and fish in Florida and cooked a bit of Cajun-style food — despite being from Tennessee — used to watch Justin Wilson regularly and I’d watch with him when I was visiting. It’s one of my fond memories. The last time I saw my grandfather before he died was actually in New Orleans. We ended up going to the Court of Two Sisters for lunch. It was one of the first restaurants I went to in New Orleans and it was always a favorite. While we were having lunch, he told me about visiting the restaurant while he was in the Navy during WWII. They’d been stopped in New Orleans before heading out and he and some friends had dined at Court of Two Sisters. Years later, while we were cleaning out my grandparents’ home, I found a photo taken that night. It’s one of my cherished possessions. That’s him on the right.)

So, anyway, if you’re in Utrecht this Tuesday, 9 February, head to Vino Veritas (Biltstraat 9) and pass a good time as if you were down on the bayou! Laissez les bon temps rouler!