There’s a lot going on in Utrecht this weekend. Here are a few highlights of some of the bigger events.

Utrecht is celebrating its 890th birthday tomorrow. It was 2 June 1122 when keizer Hendrik V (Emperor Henry V) granted official cityhood to Utrecht. Of course, the city has been around in one form or another for much longer. You can see some of the 3D depictions of what part of the city looked like if you click on this link.

To celebrate this anniversary, there will be a variety of festivities tomorrow for Stadsdag (City Day). Starting at 10 a.m., there will be tours, special programs and performances and much more. You can see the full program listing on the official website. I’m still trying to work out which events to go to, such as the tour of the Buurkerk clock tower and the Domcarrillion concert. There’s also a lot of stuff going on at the Utrechts Archief (archives), so hopefully the weather will cooperate!

To go along with the look back at Utrecht in the past, you might want to check out this documentary that the RTV Utrecht channel aired recently. Even if you can’t understand the Dutch, you might be interested in seeing video of the Domplein area, which I post frequently, including in both of these photos.

On Sunday, it’s time for another Culturele Zondag (Cultural Sunday). This month’s theme is dance, with all sorts of dance styles being represented by professionals and amateurs alike. Throughout the city, there will be performances in shops, museums, theaters, and even on the street. In fact, Voorstraat will be the site of a street festival, with dancing, live music, DJs, and special tours.

Finally, on Sunday, there’s also the latest edition of De Streekmarkt on Twijnstraat. This outdoor market features some of the best of organic and local food items. The next one isn’t held until September, so you might want to be sure to check it out this month to see what special summer items are on hand.

As I mentioned previously, the Utrechtse Fabriek, an indie craft show took place this weekend (well, Sunday and Monday, but Monday was a holiday) and I stopped by on Monday to see what was on offer and to see Kerryanne’s display. I’ve always admired her work on her blog and her website, so it was nice to finally see it in person. Over the holidays, she had posted some photos of little crocheted birds that I thought were adorable. Fortunately for me, she had some for sale at the Fabriek and I was able to pick one up. Isn’t he/she cute? I need a name (and a gender), though. Any suggestions?

Later on that day, we did head over to the Domplein to see the UDans that I posted about, even though I never did get around to attempting to learn the choreography. Unfortunately, the big dance wasn’t happening until later, it seems. We stuck around for a while to watch some of the other dance performances, but I had spent the day lounging in the sun and was quite sleepy as a result, so we soon headed home. There was a pretty large crowd there, though, so I’m sure it was quite a sight when everyone got their chance to shake what their momma gave ’em!

We have a monthly Cultural Sunday event here in Utrecht that changes themes each month. This month, the theme is dance. This month, the event is also taking place on a Monday, instead of Sunday. Must be due to the Pinksterdag holidays. If you like to dance, you really may want to come to town tomorrow if possible. At 17:00, there’s going to be a big group dance at the Domplein, with participants — and that can be anyone — doing a choreographed dance. It’s kind of a fun idea. There’s even an instructional video so you can (try to) learn the choreography. I think I may try to talk G into going over with me tomorrow. I’m awful at learning choreography, but I still think this could be a fun thing to see! 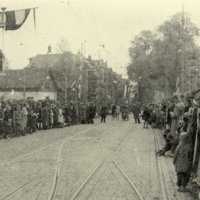