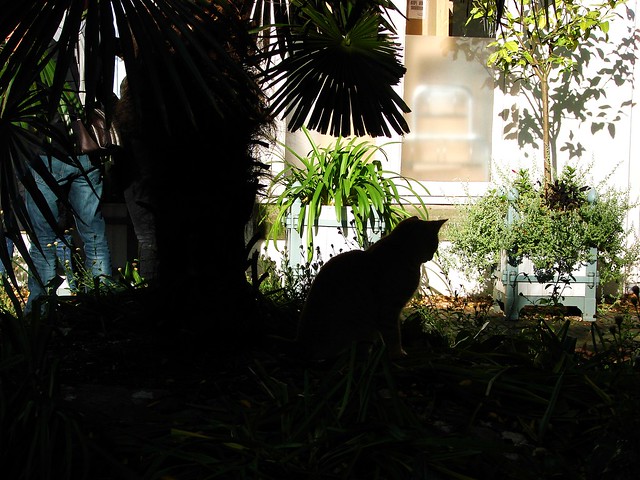 Lurking in the shadows — or on a wall, or under a bench, or beneath a grate, or out a window — at Flora’s Hof and the connecting bookstore, you’re bound to come across a fearless ginger cat. I’ve seen this cat grow from kitten to adult, and it’s always doing something crazy or cute. In other words, a classic cat.

A few weeks ago, while taking the Utrecht Free Tour with visiting friends, everyone got to see this charming cat for themselves. Many photos were taken, especially by my fellow cat lovers, as on that day, the orange tabby was relaxing in the shade of the palm tree in the center of the garden. Yes, a palm tree! No wonder it’s one of my favorite spots in town! 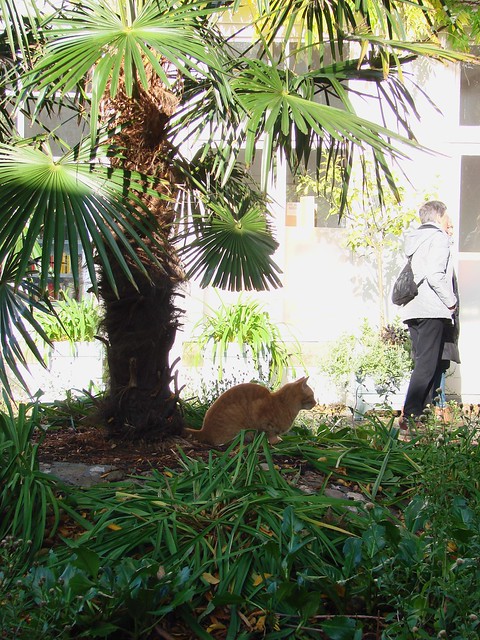 So the next time you’re in the little garden area off Servetstraat, next to the Domtoren, keep an eye out for this crazy kitty. She’ll typically pose for photos, but be fast, as she may suddenly change her mind and race off to parts unknown, through her own secret system of tunnels and bolt holes. But beware if she’s hanging out in one of the gratings along the garden path. She’s been known to swipe at hands reaching down irresistibly to pet her. Ouch! 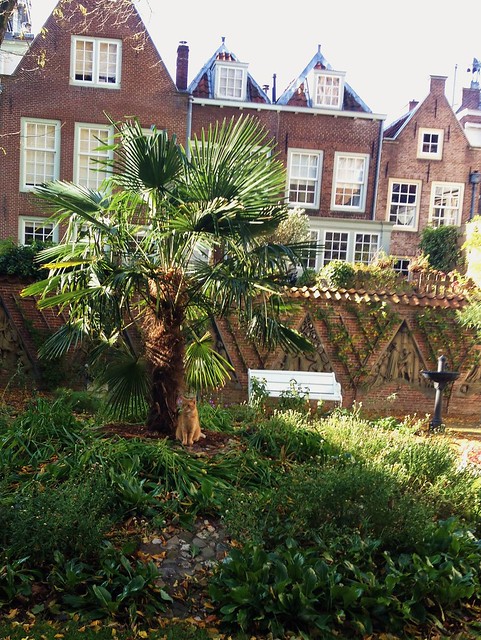 If you can’t get enough of the Domtoren bells, head to Flora’s Hof — or anywhere in the nearby vicinity — and enjoy an hour-long concert every Monday evening in July and August. The free concert series begins at 8 p.m., with people beginning to gather in Flora’s Hof at 7:45 p.m. Each week will see different music choices performed by various experts. The Domtoren’s recently retired Arie Abbenes will be performing this evening. You can see the full list of upcoming events at the bell ringers website.

It seems I wasn’t hearing things last week. They really do play Tubular Bells on the Domtoren; it will be the closing concert of the series in August.

These large, yet mobile, street organs show up in various spots around town, but this was one of the first times I’d seen them being moved into position. I see — and hear — them most commonly on some of the shopping streets near the Cetraal Station around Christmastime, but they do make occasional appearances throughout the year. In this case, the organ was making the rounds to celebrate stadsdag, the city’s 890th anniversary.

Utrecht has a museum dedicated to these kind of musical boxes that come in all shapes and sizes. The Speelklok museum is one of Utrecht’s most-recommended museums, and with good reason. If you take a guided tour, you can hear the variety of boxes and organs playing their lively tunes. I’ve been a few times now and I always enjoy it.

This one eventually came to rest in the Flora’s Hof, the site of the former bishop’s palace, which I’ve mentioned recently. Every time I hear one of these organs play, I get a craving for suikerspin (cotton candy/cotton floss), because of the carnival-like sound.

Saturday, while wandering around the city, I decided to stop in at the Flora’s Hof next to the Domtoren. They always have beautiful flowers and a changing array of plants on display, including my beloved palm tree. As I was about to leave through the old gate I saw a flurry of flying cats as the black cat pictured above seemed to be chasing a ginger cat through the window to the right. The ginger cat disappeared, but the black cat decided to hang out for a while.

Suddenly, though, I saw another ginger cat dart across the walkway and hide behind a bicycle parked next to the wall.

Such an adorable little face! I don’t think it was the same cat that ran in through the window, unless she’s got some secret underground passage that lets her out on the opposite side in very short order. But they are cats, so it may well have been the same cat. They are great at disappearing acts and popping up where you least expect them.

The black and white cat eventually decided to head back indoors, perhaps to cool off for a few moments from all the sunbathing and running around. I’ve seen quite a few cats in the Flora’s Hof over the years, providing yet another reason to stop in whenever I get a chance. There’s no telling what hijinx you’re bound to see!

I haven’t done a Time Travel post in quite a while, and while this isn’t quite the same format as I’ve done in the past, it does include going back further in time. You see, I’ve been exploring a great website (and Facebook and Twitter account), Bouw van de Domtoren (building of the Domtoren). What they’re doing is rendering 3D images of the various stages of construction of the Domtoren, as well as what the general area looked like with the many buildings that once stood there.

One of the pictures that I saw today really blew me away. It was a rendering of the gate in the picture above, but with a view into the Bishop’s Palace that once stood there.

You see, the Bishop’s Palace is no more. That area is now a small garden with a palm tree! I knew about the Bishop’s Palace — Utrecht was a bishopric city — but I never knew what the buildings actually looked like. This is what the garden, now known as Flora’s Hof, looks like now.

I need to go back and do some proper translation and figure out some timelines to better understand all of the dates, but I thought I’d at least share the reconstruction and the website so that those who are interested can look through it all for themselves. It also reminds me that I need to read more about the Salvatorkerk that originally stood in the Domplein.