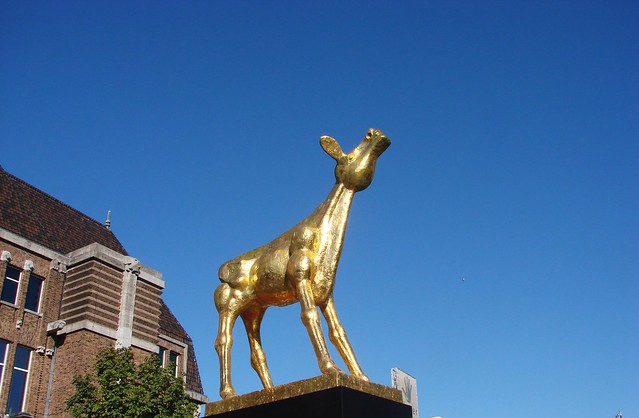 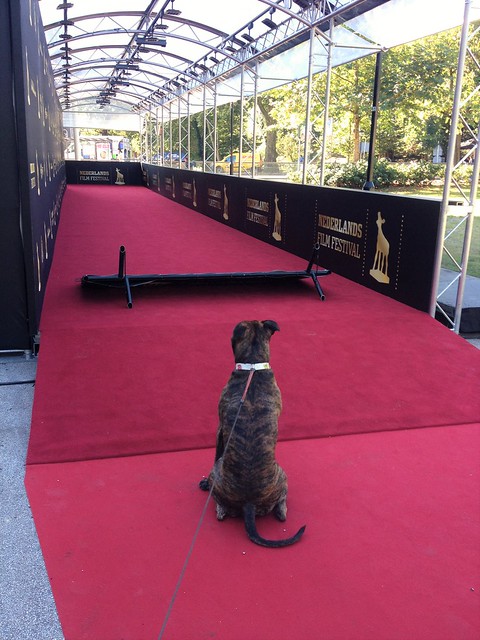 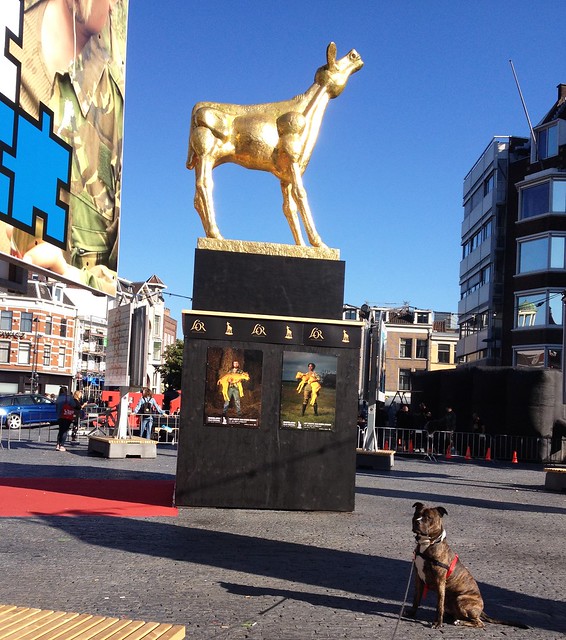 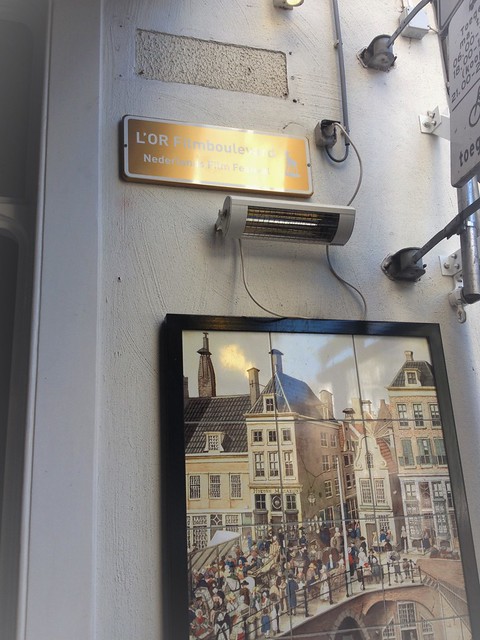 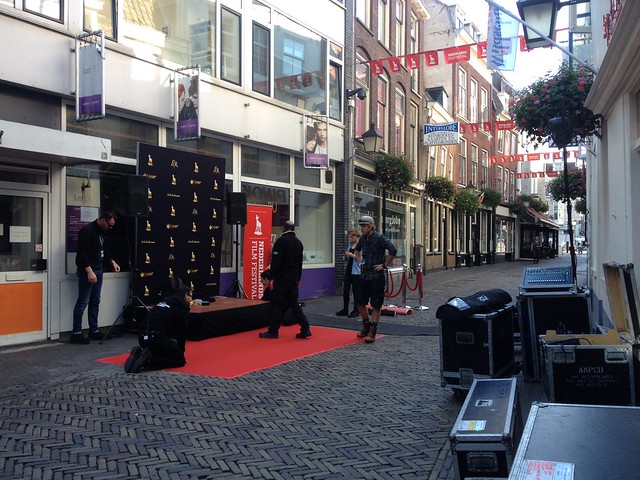 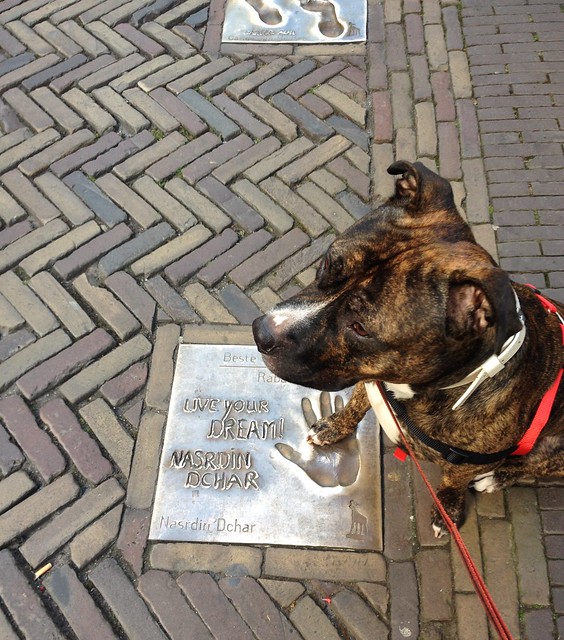 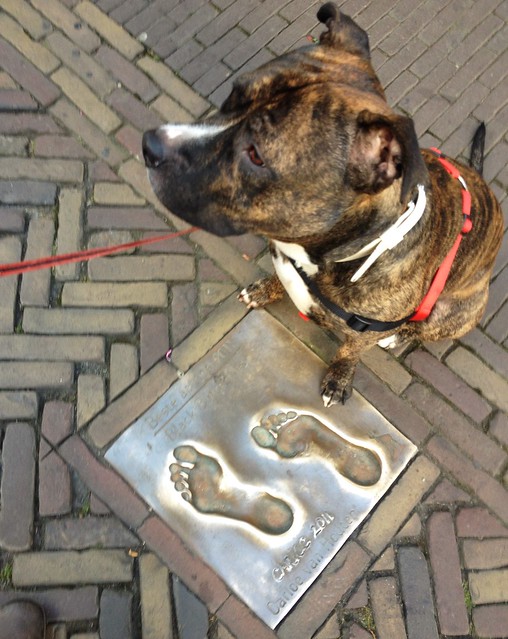 The annual Nederlands Film Festival has returned. Every year, for a week and a half, Utrecht is overrun with film makers and film buffs as a variety of films are shown at cinemas and theaters around the city. I’ve not gone to see any of the films yet, but I always look forward to the arrival of the huge Gouden Kalf (golden calf) statue’s arrival in the grounds in front of the Stadsschouwburg. The golden calf is the symbol of the film festival and a miniature version is given out to award recipients. It’s essentially the Dutch version of the Oscar.

They literally roll out the red carpet at many of the theaters around town, and this year they’ve rolled out the red bikes, as well. At various spots around town, you’ll see a bicycle painted red and with theater names and directional arrows — along with the calf symbol — to direct visitors to the event locations. As you’ll see in the next photo, this bike is directing visitors to the City Theater on Voorstraat, and to the Stadsschouwburg off Lucasbolwerk.

This evening, as we were relaxing on the sofa, watching the news about the austerity protests taking place in cities around Europe, we suddenly saw large groups of people walking past our own window. Was there an austerity protest going on right in front of us? An ironic one, considering the marchers seemed to be wearing golden cloaks? Nope! It was some sort of parade related to the film festival!

I’m not exactly sure what the parade was for, but it might have something to do with the Jubilee Evening festivities taking place tonight. I found a mention of a parade of fashion artist Aziz Bekkaoui, but I’m not sure they literally meant a parade. Either way, there are music, art and film celebrations at the Stadsschouwburg tonight, and that seemed to be the direction in which they were heading.

They were also singing as they walked along, and I realized that I knew the song! It’s a Dutch classic, although I admit that I know best the version that was performed at the first Nacht Van Het Vieze Lied (night of the dirty song) I attended. The song was Zing, Vecht, Huil, Bid, Lach, Werk en Bewonder (Sing, fight, cry, pray, laugh, work and admire) by Ramses Shaffy. I really do like this song, so for your listening pleasure, here it is!

It’s Nederland Film Festival time again. The Gouden Kalf (Golden Calf) statue is back out in front of the Stadsschouwburg and the city is packed with attendees.

It’s that time again! The Nederlands Film Festival begins it’s 10-day run tomorrow. As I type, they’re setting up the Golden Calf in front of the Stadsschouwburg over on Lucabolwerk. They’ve had some of the posters up for the past few days, but the Golden Calf wasn’t there and I was worried it had been a one-off thing last year. As I took Pippo out this morning, I was thrilled to see a flash of gold through the trees. Jahoe!

Sadly, no Rutger Hauer this year, at least not publicized; he received a special award last year. That was when I found out he was Dutch. I’d always thought he was German or Scandinavian. How embarrassing! Despite being a fan of his for years, I’d never been sure of his nationality. I blame it on the fact that we couldn’t just Google any celeb we were curious about back in the day, so the reality was I knew next to nothing about Hauer except for the fact that he made some very cool films.

This year, they’re focusing on Dutch filmmakers who have gained some popularity in the international market, but haven’t really been well-known domestically. The title of the theme is The Dutch Angle, a bit of a pun, since that is also a technical term for a particular type of angle or perspective in filming. The Wikipedia entry gives a good example, since it doesn’t make as much sense when just described, at least not to me.

Oh, and for the record, the Golden Calf is the award statuette that is given to the winners on the final night of the festival. Sort of like the Oscar.

Pippo checking out the recently installed film festival set-up at the Neude. He approves the color choices.