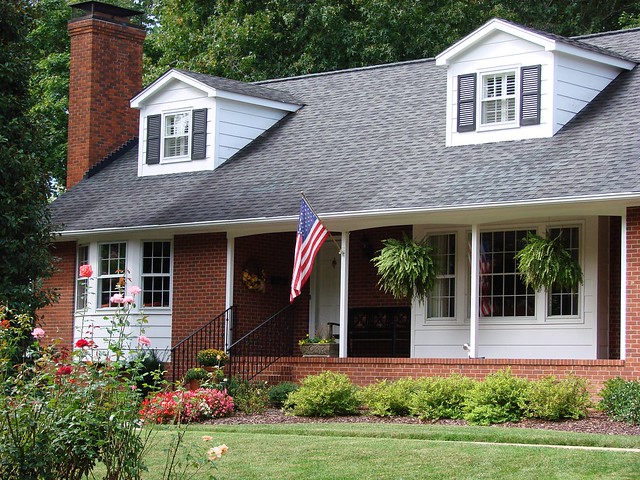 Between working two jobs and preparing for the Wittevrouwenfeest tomorrow, American Independence Day has gotten a bit lost in the mix. Yet being able to celebrate multiple holidays and important events is one of the perks of being an expat/immigrant. Although we won’t be doing the traditional barbecuing this year, I have made some potato salad (a traditional July 4th side dish) for lunch today. It’s the little things in life. 🙂

One of the things that stood out to me on my trip back to the US last year was the number of American flags I saw everywhere — homes, businesses, churches, etc. This is nothing new, but after spending a number of years here in the Netherlands where the flag is only flown on specific dates, it really stood out. Just a short walk through my parents’ neighborhood revealed a number of flags, and this motor inn up in the mountains of North Carolina certainly wasn’t going to have anyone questioning its patriotism! 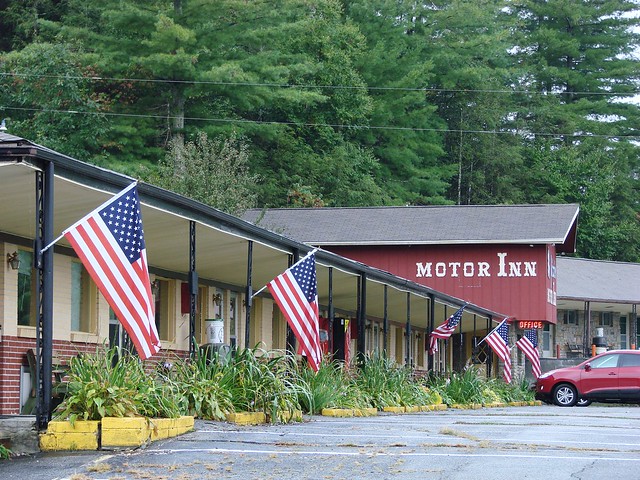 So, Happy Fourth of July to my fellow Americans and happy Friday to everyone else! By the way, if you’re in Utrecht this weekend, Biltstraat and the Wittevrouwen neighborhood are having a big block party. We’ll be representing Vino Veritas there, so come by and say hi, and try some of our Italian wine and food. Or come by today and enjoy the sunshine on our terrace (or cool off inside). Either way, I’ve really enjoyed meeting so many of my readers so far! 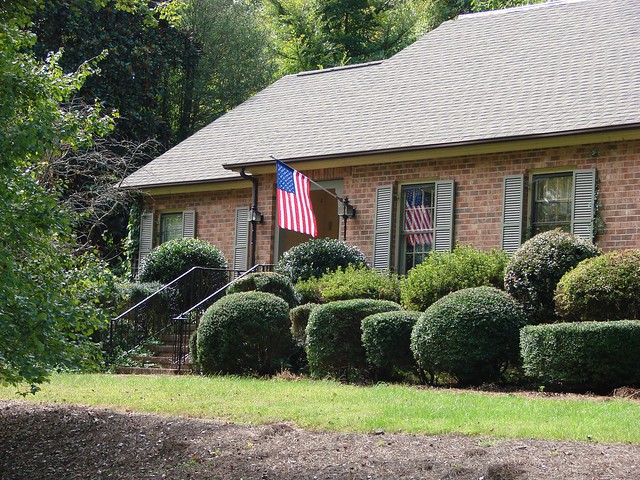 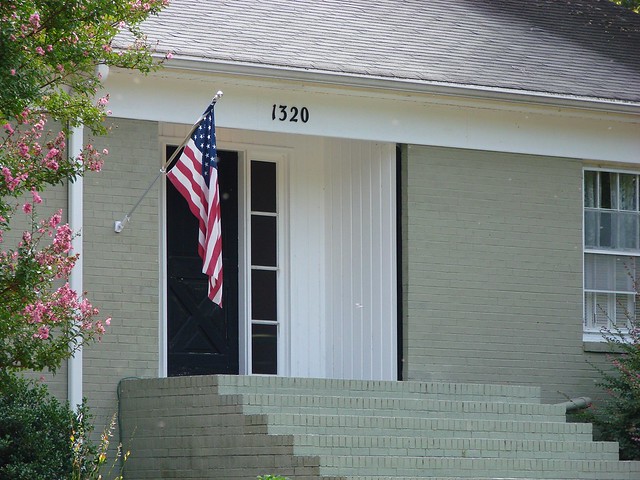 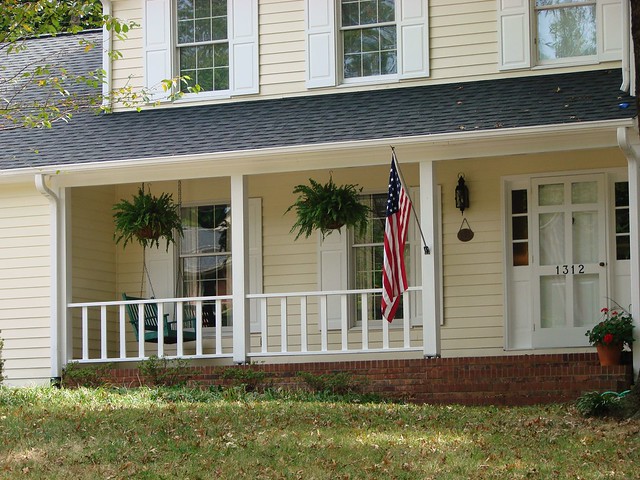 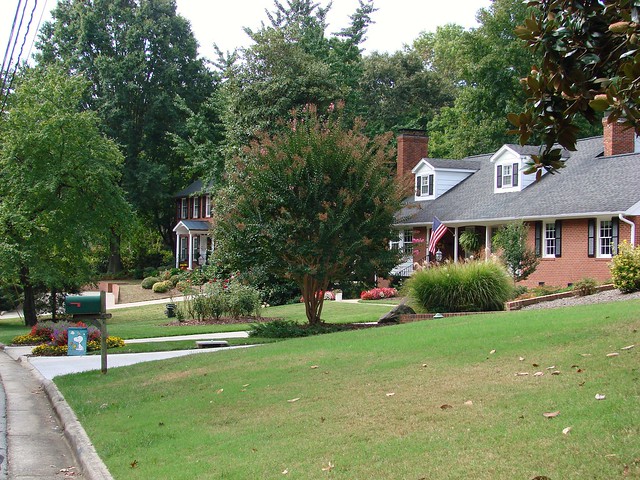 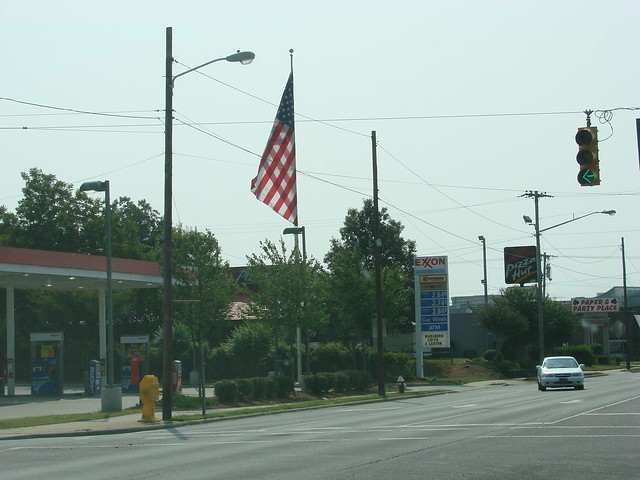 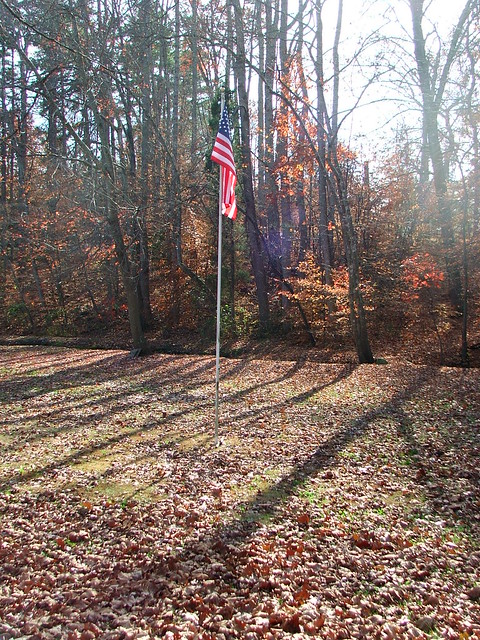 In honor of the Fourth of July — America’s Independence Day — I thought I’d post a couple of photos of things with a touch of the US in them that I’ve seen recently around town. Some have made me laugh, while others have stood out simply for being here.

The first is the photo above. You may not be surprised to find out that this building belongs to one of the university student associations. The large Bavaria banner and flag isn’t referring to the German state. It’s the name of a common beer brand. Although the beer banners, bird statue in the window, and bicycles out front make it look like many a student domicile, the sign saying Bolwerk Shore made me laugh. The cringe-inducing show Jersey Shore has made it to Europe, and the students seem to have created their own version, although hopefully just as a joke for the end-of-year party they had had the night before. (Bolwerk refers to the street name, for what it’s worth.)

On the same street, but different day, I was stopped in my tracks by the sight of this yellow school bus. In the US, I wouldn’t have looked at it twice. It was a common enough sight throughout the school year and I’ve ridden my share of them as well. Yet here in the Netherlands, they stand out the way a double-decker bus would stand out in the US. They just don’t exist here. Students use regular buses to get to and from school, if they use the bus at all.

However, it’s not the first time I’ve seen one here in Utrecht, but that one was being used as a children’s mobile book store. I can’t help but wonder if it’s the same bus, though. After all, it’s been two years since I saw the bus the first time.

Happy Fourth of July to all of my fellow Americans, wherever they are in the world, and to everyone else, Happy Thursday!

It’s time to take a pause from Dutch scenery and reflect on the beauty that is the United States of America, as its citizens, near and far, celebrate the founding of the country. Regardless of politics, the scenery can be absolutely breathtaking. There are times when I’m watching a program that features some of the country’s beautiful settings and I get a bit homesick. At times, I even get a bit homesick when I see your average suburbs. Simply because they are so very American. I feel like I’ve settled in very well here, but it doesn’t change the fact that I spent 30+ years in the US. It will always be home, in one sense or another.

So today, in honor of Independence Day, I thought I’d share a few photos of some of the beautiful natural scenery that I grew up seeing around Signal Mountain/Chattanooga, Tennessee, when I’d go visit my great-grandmother. Quite a difference from the flat landscape I grew up with in Florida, and am used to here in the Lowlands.

And two last shot of my beautiful white sandy beaches of Florida. I can practically smell the salt in the air …

Happy Fourth of July to all of my fellow Americans, no matter where you’re living today! I may not be the most patriotic of people — I’ve grown up with mixed loyalties, and those have just gotten mixed up further over the years as more countries have their influence on me — but I do think the US has had some good ideas and managed to put a few of them into practice, even, so today I raise a glass to all of those people who have worked to make the country a better place. Just remember that all of those freedoms and liberties that you’re so proud of should be extended to every American, not just the ones you like. 😉

We’re celebrating this evening with ribs that we found at the organic butcher. They had precooked and premarinated ones, but I managed to ask (in Dutch) for some plain, uncooked ones. They turned out to be incredibly cheap (goed koop), so now I wish we’d bought more! I made some potato salad to go along with the ribs and we’ve got a dry rub about to go on them, and I used the last of my molasses to make some BBQ sauce. Molasses is one of those “exotic” foods here that I can buy in the expat food shop, for the price of an arm and a leg. Thank goodness the bottle I bought lasted for almost three years. It makes the cost a little more bearable! The Dutch do their fireworks on New Year’s Eve, so things will be quiet here. If you’re setting off your own fireworks, enjoy and be careful!

Yesterday morning — despite our no-ads sticker on the mail slot — we got this flyer delivered. I can’t help but love it. It’s such a beautiful mash-up of America, Dutch-style.

The front is almost over-the-top American with the big flag and the sexy girl dressed up in Daisy Duke shorts, midriff-baring western shirt, and cowboy hat and boots. Yet, there’s just something about the girl that doesn’t look American. I keep thinking she looks a bit more Eastern European. It’s a subtle distinction. And of course, on top of all this American symbolism, there’s the almost jarring (from a US-perspective) inclusion of the Dutch text, which in this case says: De lekkerste van Nederland! (That would essentially translate to “the best tasting in the Netherlands”.)

Then you flip the flyer over and things get even funnier!

Things start off well enough with the spareribs, although some of the sauce options may be a bit different from what you’d get in the US. At least one of them is probably more of an Asian flavor with the sweet chili sauce (I’m not sure if that’s the Sweet or the Chilli. Chilli con carne tastes different here, too) Then you get to the cowlsalade. I’m pretty sure that’s supposed to be cole slaw. The cole slaw we’ve had at the Broadway steakhouse on the Oudegracht was quite good, but you never know. The only recipe I could find for cowlsalade didn’t actually have any mayonnaise (or any other sauce) in it at all.

But then you get to the funny part. The next item on this American-themed menu? Kipsaté. (Chicken satay) To be honest, I think you would be hard-pressed to find any restaurant in the Netherlands that doesn’t have saté on the menu, be it high end or snack bar; it’s everywhere. It’s not that it’s unknown in the US, but it’s just not something that you see all the time. When you get just a further bit down on the menu to the American Combi Grill option, it’s kind of funny to see ribs, chicken drumsticks, and good ol’ saté make up the American combination platter. Today is the Fourth of July — Independence Day — in the US, and it’s a tradition that lots of people will be grilling today to celebrate. Ribs and chicken (and burgers, hot dogs, steaks and even veggie burgers) will be sizzling on the grills today, but I’m pretty sure your average American won’t be grilling up some chicken saté. Kabobs maybe, but not saté.

They do offer the American Burger XXL, “a real American double cheeseburger”. I wonder what cheese they use. Probably goudse. The burger comes with the usual toppings such as lettuce, tomato, onion and pickle, but they also throw in cucumber for that little something different. There’s also a special “hamburger sauce”. No telling what that could be. Thousand Island dressing, just like McDonald’s Big Mac “special sauce”?

Speaking of sauces, they have a whole section devoted to sauces, but even here, they’re so very Dutch. Knoflooksaus (garlic sauce and very tasty), whiskysaus, shaslicksaus (I have NO idea, seems to be some sort of bbq sauce), currysaus, fritesaus (basically, mayonnaise), appelmoes (apple sauce), and of course, saté sauce. There’s one other sauce listed: American fritessaus. Frites are fries, so it’s American fries sauce. You’d think that would be ketchup, wouldn’t you. You’d be wrong. It’s also mayonnaise. I’m not really sure how it differs from regular fritessaus. Can anyone offer a good explanation? For what it’s worth, there’s no ketchup listed in the sauces. I’m not sure it’s available at all. I prefer mayonnaise for my fries, anyway, so it’s not a loss for me, but it’s still funny to think of an “American” restaurant not having ketchup.

When I was joking with G about the menu and the subtle differences, his response was, “Welcome to my world.” He’s right; now I know how he feels any time he goes into an “Italian” restaurant. Similar base ingredients are there, but what is done with them from then on can be quite different! It’s not bad, it’s just different.

We picked up a package of ribs at the grocery store for today’s celebration. Unfortunately, they’ve already got their own marinade/seasoning, so I can’t do my voodoo that I love to do. There were three options in the flavoring: Indian, Piri Piri, and Texan. We went with Texan. I’ll let you know how that goes.

(This post is dedicated to Kerryanne and Ken, a couple of fellow Americans I got to spend an enjoyable evening with last night. One of our topics of conversation was the differences in foods. I’ll never think of potato salad in the same way!)