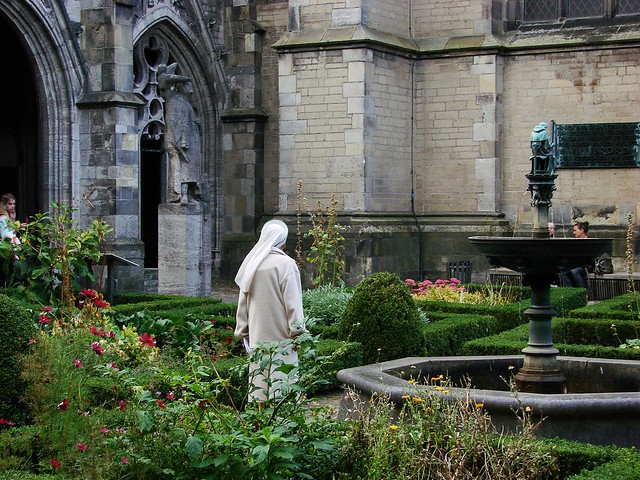 A moment captured in the Pandhof next to the cathedral. My continuing photographic goal is to get a photo of a wittevrouw (literally “white woman”, but referring to the cloister of nuns who wore a white habit) on Wittevrouwenstraat/brug. Someday!

This is an area I know very well, so it’s particularly interesting to me to see how it used to look. In this case, the photo dates back to 1947. It’s not that long ago, but it still amazes me to see the horses being used to pull carts. Not surprising are the bicycles and bakfietsen.

As you can see, it really hasn’t changed much at all in the past 60+ years. Other than the addition of the steet signals and the absence of trams, things have remained pretty much unchanged.

This is an important part of the old city center. Since the middle ages, it has been one of only four entrances into the city center and it used to have a protective gate right at this spot where the bridge is. If it’s not clear, there’s a canal running beneath the bridge. That canal is part of what is essentially a moat that goes around the old city center. The gate was eventually torn down in 1858. This is also where the Canadian forces entered the city when they liberated it from the German forces at the end of World War II.

Here’s another image of the same area and you can see that the buildings further down the street have also remained the same over the years.

Here’s a better contemporary view down the street without all of the signal lights in the way. You can better see just how little this corner of the city has changed.

Wittevrouwen means white women and refers to the order of nuns (I assume it referred to them wearing white habits) who had a cloister in this area. Nowadays, the Utrecht brewery De Leckere sells a white bier with the name Wittevrouwen, drawing perfectly from the city’s history.