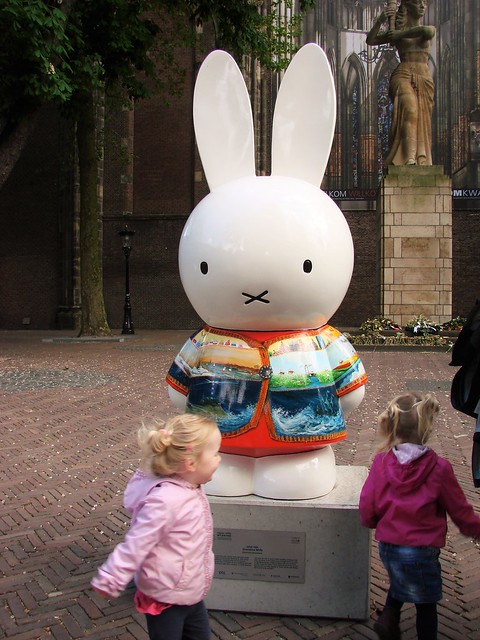 I never finished posting some of the Nijntje statues that were dotted around the city last summer as part of the celebration of Nijntje’s (Miffy’s) 60th birthday. Seeing as today is Easter, I thought today might be a good day to post one of the image-heavy Nijntjes. This one is Oma Nijn (Grandma Rabbit) by artist Charlotte Dematons. Her version has Nijntje in a cozy cardigan featuring typical scenes of Dutch culture with Nijntje scattered throughout. I like the one where she and her friends are cycling through the tulip fields in both sunshine and rain. A bit like today! Which is your favorite? 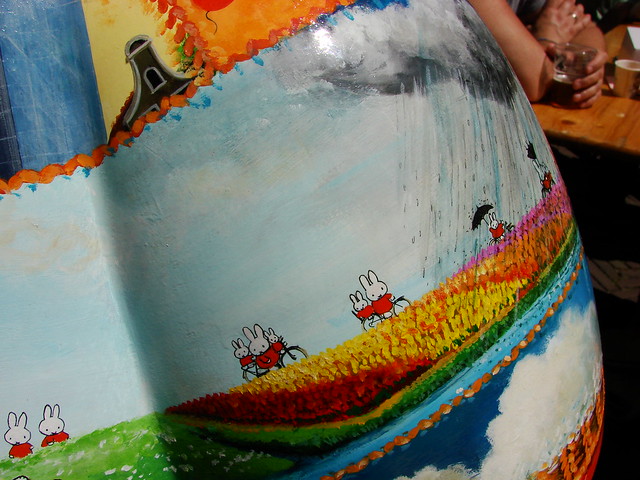 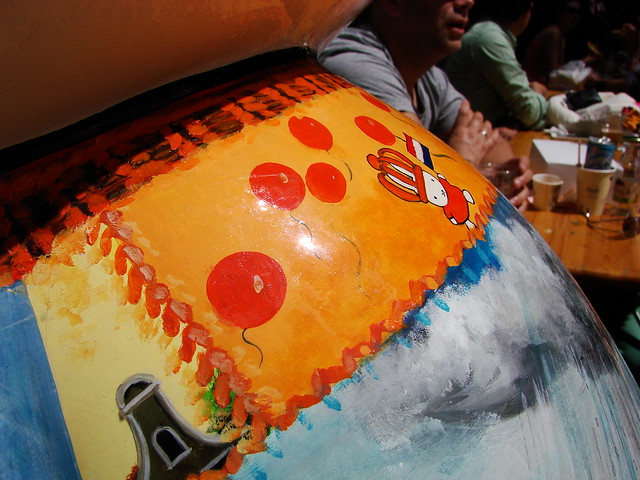 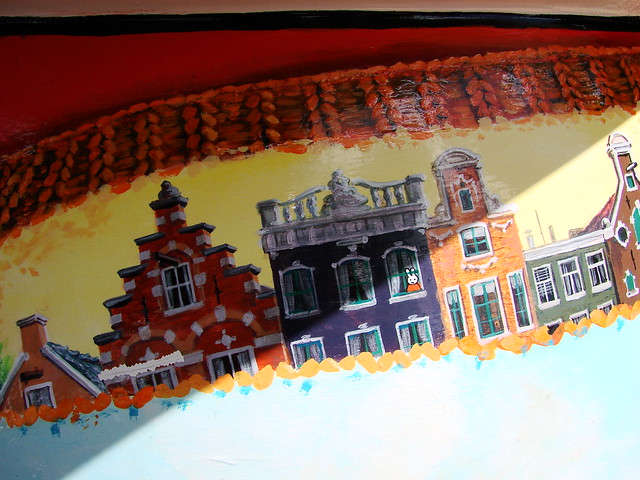 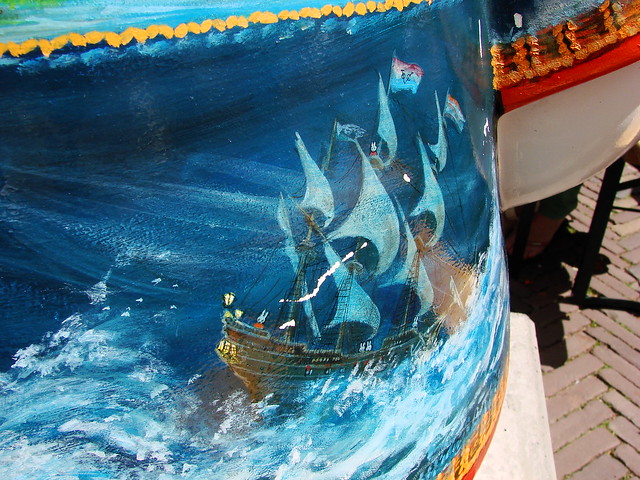 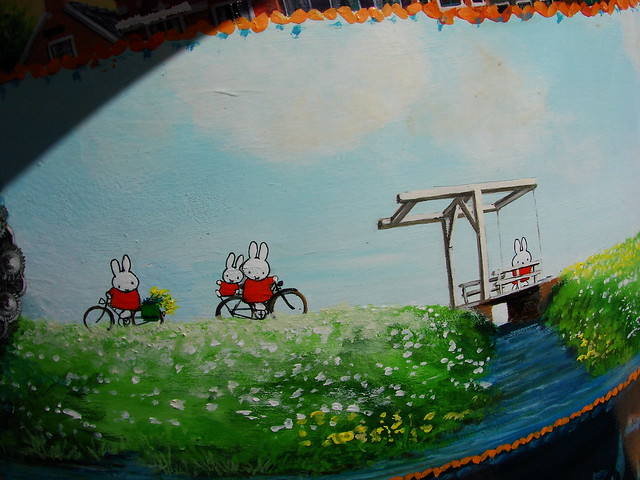 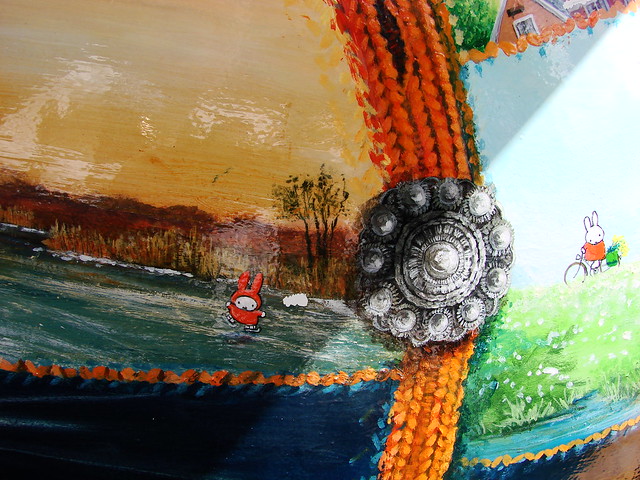 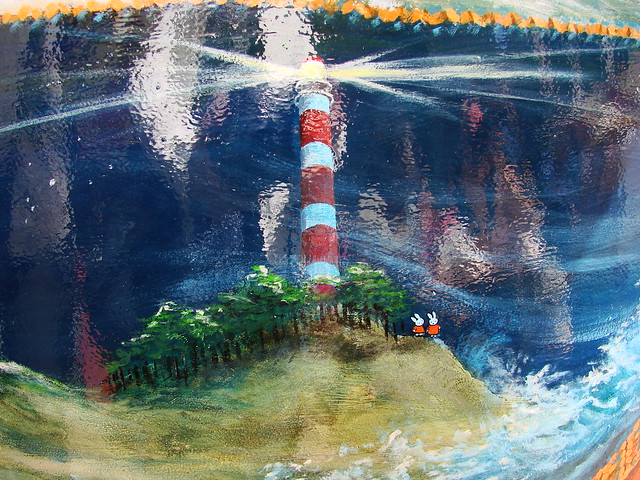 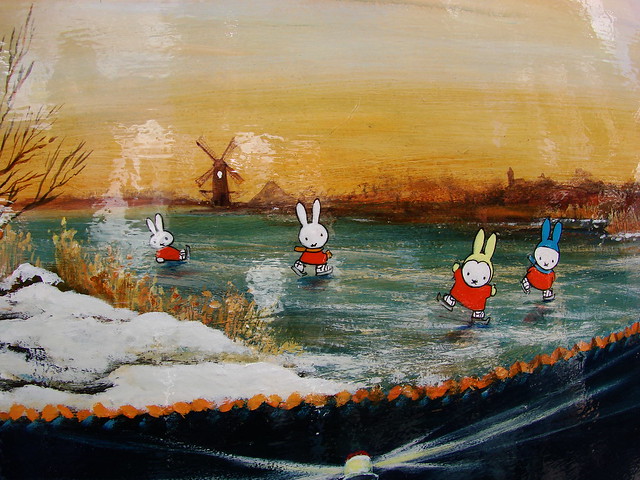 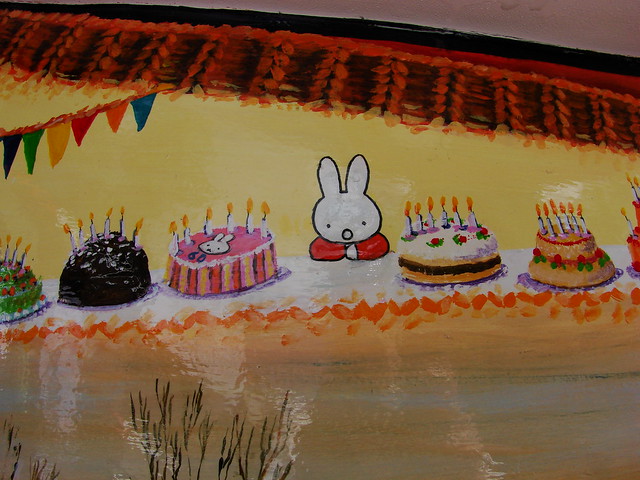 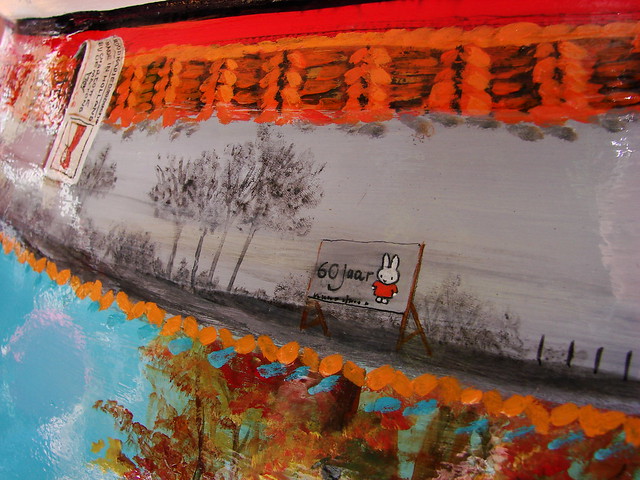 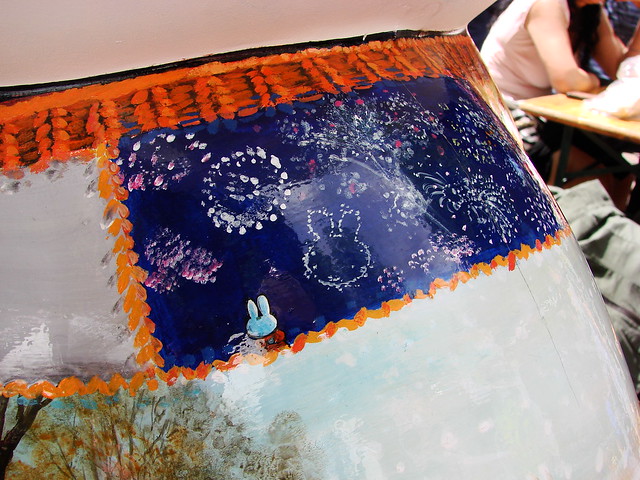 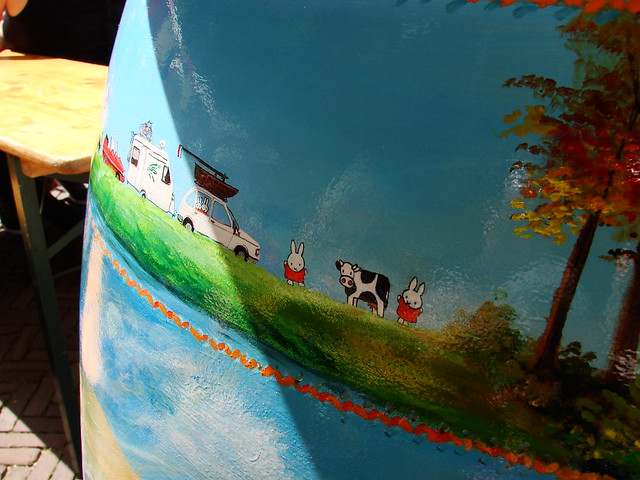 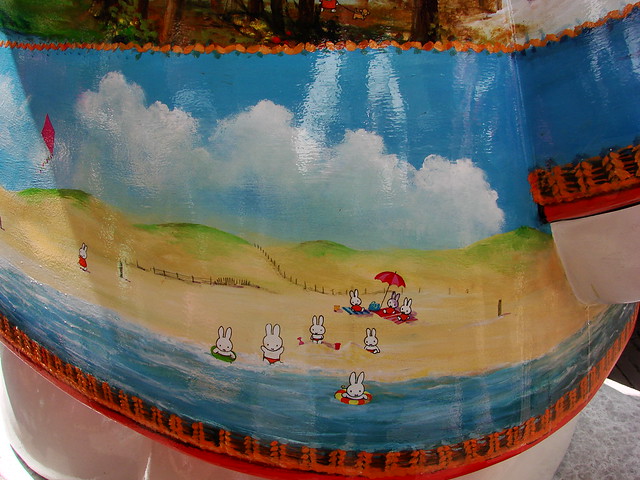 Whether you’re religious or not, Fridays are generally pretty good. I still have work to do this weekend, but I’m still happy that it’s Friday for some reason. Sadly, our weather isn’t so good. It’s been overcast much of today and looks to be the coldest Easter in at least 50 years. Though a White Christmas may be charming, a White Easter, not so much; yet there’s the possibility of snow in some areas. We’re also doing the time change this weekend, although if lots of people are getting Monday off, that might help with the adjustment. I’m not sure what it will do to my own frequently screwy ability to sleep; I’ll have to wait and see.

All of this is a rambling way of wishing you a Vrolijke Paasdagen (Happy Easter). Don’t forget, you’ve got through Sunday to leave an awesome comment for me at the Expats Blog writing contest. I’d send you chocolate eggs as a thanks, but I think I’ve eaten them all.

ETA: Moments after posting this, it began to snow here. Still coming down. Is this an early April Fool’s joke?

Happy Easter (Paas) to those who celebrate. I don’t, but that doesn’t stop me from thoroughly enjoying and appreciating the chocolate eggs so prevalent this time of year! The stores all sell bags of mini chocolate eggs with various types of chocolate and fillings. I’ve been particularly fond of the caramel chocolate eggs this year. Lekker!

Koek & Chocolade, a wonderful chocolate store here in town, had this amazing display of chocolate eggs in their store. It’s probably just as well it was a Sunday and they were closed when I saw this. I might not have been able to restrain myself from going in and buying one of those massive eggs! So pretty! So delicious! Any drool marks left on the store’s windows are the fault of the dog. It wasn’t me, I swear!

Although we don’t technically celebrate Easter, we do take advantage of using it for a good excuse to have a special dinner. We stopped by the biologische (organic) butcher on Biltstraat on Saturday to splurge on some tasty lamb racks. Next door at the Super de Boer grocery store, we found some lovely fresh asparagus, and I had plans for a potato galette. All in all, a nice menu!

The potato galette was vaguely inspired by various recipes I’d seen online, although by the time it came to cook it, I had to wing it, since we were without the internet at that point. My copies of Joy of Cooking and How to Cook Everything weren’t much help, either. Fortunately, winging it turned out just fine. The dish turned out excellent and G was raving about it. I figured since I remembered to take a few before and after photos, I’d share the recipe, although I don’t have exact amounts to pass along to you. I made mine in a small springform pan that was enough for two people. You could take it larger to feed more or to make more of a main meal out of it.

When we moved, I sadly left behind a lot of my kitchen utensils and instruments. I have no idea what I was thinking, especially since I had such a lovely stocked kitchen. It was bad enough leaving behind my beautiful Kitchen Aid, but why I left behind my zester and other smaller, non-electric tools, I’ll never know. I think by that point I was too caught up in taking as little as possible. Fortunately, I didn’t leave behind my mandolin. It’s a beautiful stainless steel one that my mother got me for Christmas a few years ago. It’s wonderful for slicing potatoes for homemade chips or for dishes such as this one.

I washed and sliced three or four smallish potatoes, cutting them at roughly a quarter-inch thickness. Basically, you want to leave them thick enough so they don’t fall apart easily, but thin enough that they’re not big chunks. I then parboiled them for 5-8 minutes to take the edge off them, so that they wouldn’t need a ton of time in the oven, with the possibility of raw bits and pieces. Once they were done, I drained them and left them to cool off a bit while I moved on to the onions.

I thinly sliced an onion and then slowly cooked it in a bit of olive oil and butter until they started to caramelize. The key really is to cook them slowly. I have a habit of turning the heat up too high and they end up more burnt than caramelized. This time I had success, though. Deliciously sweet and pretty! I added a bit of salt, pepper and dried rosemary toward the end.

Once the onions were done, I started layering the potato slices into my springform pan. Unless you know your springform has a tight seal, you may want to use a solid baking form to avoid any leakage, or you can just put the springform on top of another baking sheet with edges to contain any drippings (I speak from experience). Once you have a layer of overlapping potato slices, then add in a layer of the onions and top that with some grated parmesan cheese and some dried sage. Keep repeating these potato, onion and cheese layers until you’ve run out of ingredients or room in the pan. The top layer should be potatoes. I drizzled a bit of butter over the top, to help keep it golden and from drying out. I also added a bit more grated cheese and dried sage.

The whole thing went into the oven at around 200C/400F for 15 or 20 minutes. Basically, until the top was golden and the cheese nicely melted. Since I needed the oven for the lamb, I cooked the potatoes ahead of time and served them more at room temperature, sort of like a fancy potato salad. In other words, it’s good hot or cold. I had some potato slices left over, so I pan cooked those with some olive oil and a bit more salt and rosemary to have for lunch the next day. Why waste good potatoes!

The dinner was delicious, even if it turned out that the lamb wasn’t cooked yet and had to go back into the oven. We just ended up eating the potatoes and asparagus as a first course with the lamb as the second course. It pays to be flexible and not too picky!

Easter is coming up and one of the newer cafés on Voorstraat has a fun window display that I thought I’d share. Here’s a bit of mildly curious trivia for my American readers. The Dutch word for easter is paas, just like the brand of dye sold for coloring easter eggs. For what it’s worth, the Palm sign in the window refers to a beer, not the easter palms.