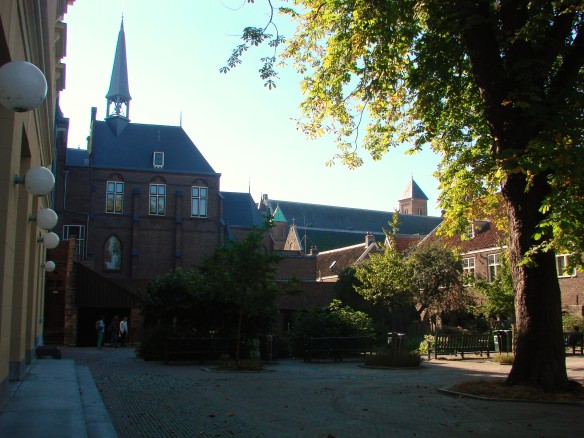 By the Mariaplaats, on the western side of town, not far from the train station, is the Pandhof Sinte Marie, or St. Mary’s Courtyard. It’s part of the remnants of a covered walkway and monastery garden that was part of the Mariakerk (church) that once stood in the area.

The sunken garden is a beautiful, peaceful oasis in the city, much like the courtyard next to the cathedral. It’s one of those places to simply go and relax and ponder life.

The last time I was there, I was pondering the colonnade (the covered walkway) that runs along two sides of the garden area. The Romanesque style colonnade — and colonnades in general — will be taking on greater meaning in my life in the future.

More on that to come …

It’s Stadsdag (City Day) once again, as Utrecht celebrates the day it was officially declared a city 891 years ago. It was 2 June 1122 when keizer Hendrik V (Emperor Henry V) granted official cityhood to Utrecht, although Utrecht’s history certainly goes back much further. Since the anniversary was on a Sunday this year, it was easy to tie in the celebration with the monthly Cultural Sunday events. This month’s theme was Vocal Kabaal, with singing to be heard almost everywhere you went. From small a capella performances to rap battles to thoughtful singer/songwriters, the options were numerous and in multiple languages. Dutch and English were obvious, but there was also a Portuguese fado singer performing at the Winkel van Sinkel.

We stopped first at the Stadhuisplein where an opening ceremony was taking place. The four singers we saw were impressive and I really enjoyed listening to their more operatic performances. As the Stadhuis was the location of the signing of the Treaty of Utrecht, it’s perhaps no surprise that there were a few people wandering around dressed in period costume.

As the weather was cooperating and the sun was shining, we decided to head over to Mariaplaats and the Pandhof Sinte Marie (a lovely cloistered garden). There, we came across multiple groups of performers. A small group was doing a lively performance of 1950s-60s style classics. Lots of fun and appealing to fans of all sorts!

Just around the corner, another group was performing in front of the conservatory, with numerous international music students watching the performance.

We also stopped in briefly at Flora’s Hof to enjoy yet another performance in a lovely garden area. The weather just seemed perfect for outdoor performances with nature providing a lovely backdrop. In all, it was a great day to celebrate a wonderful city!

I’ve walked by this garden a number of times, without realizing it was there. I really do need to spend more time around the Mariaplaats. It’s amazing the things I keep finding there. I was reminded of it recently when viewing some of the great photos of Utrecht on the website Terug Naar Utrecht (Back to Utrecht). Sunday, I decided it was time to finally go see it for myself. A morning of rain seemed like it was going to ruin my plans, but the afternoon cleared up and we were left with surprisingly warm weather and lots of bright sunshine.

The cloister, or pandhof, is all that really remains of the Mariakerk (Church of St. Mary), which was built in the 11th century and remained standing in one form or another until the 1800s. Here’s what the official website has to say about the gardens:

St.Mary’s Cloisters are all that is left of the Church of St. Mary, which formed the centre of the Mariaplaats (St. Mary’s Square). The courtyard and the remaining buildings of the 11th century cloisters surrounding it are known by the name Pandhof Sinte Marie. St. Mary’s Church was a collegiate church; the clergymen (canons) had religious as well as worldly power. They owned houses on their territory (‘immunity’), the Mariaplaats, which was separated from the city by a canal. The church appears on several of Pieter Saenredam’s paintings from the 17th century.
At the end of the 18th century only the choir remained, which was used as a concert-hall. In 1845 it was torn down and the present Arts and Sciences Building (K&W) was erected. The garden was redesigned in 1973. The Mariaplaats has been subjected to many changes over the years, but it has kept its view of the Buurkerk and Dom Tower.