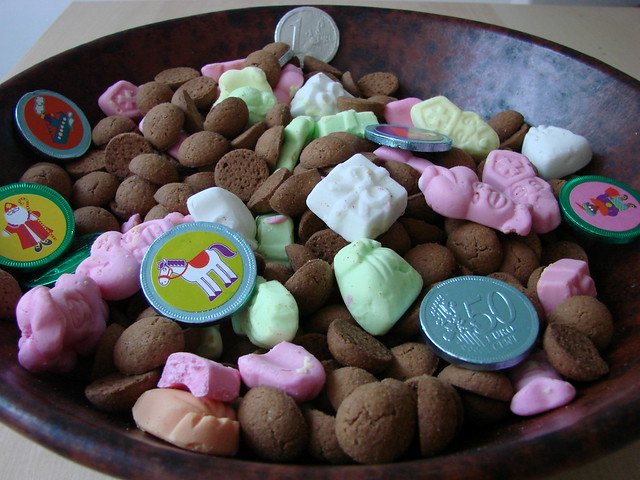 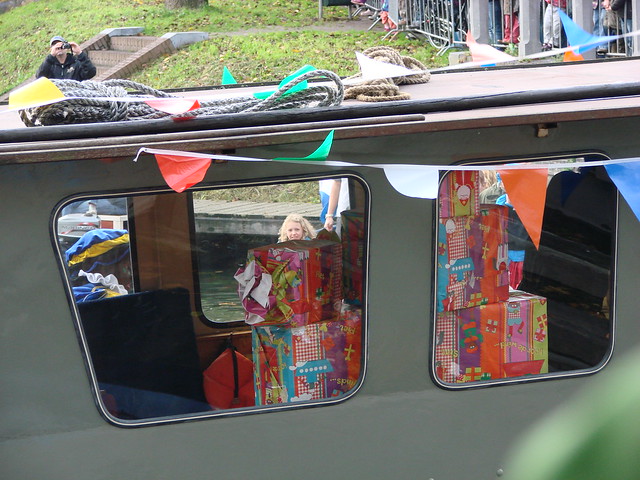 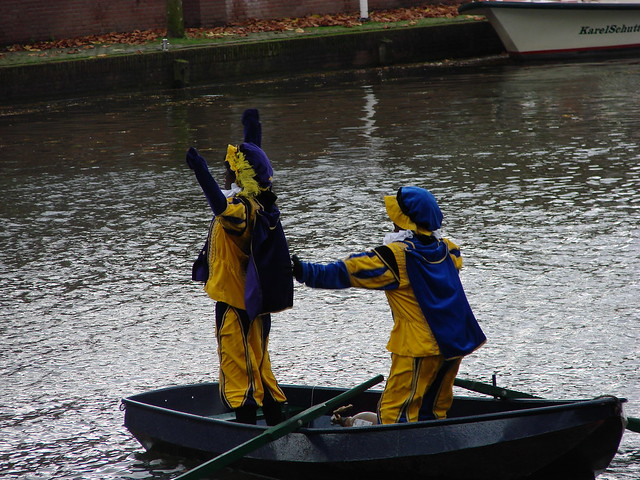 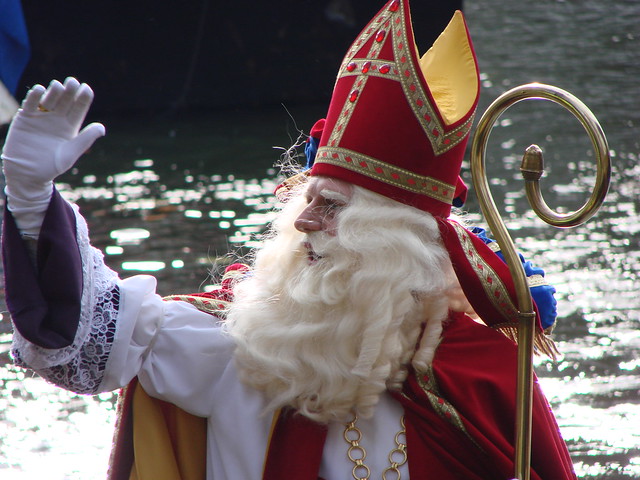 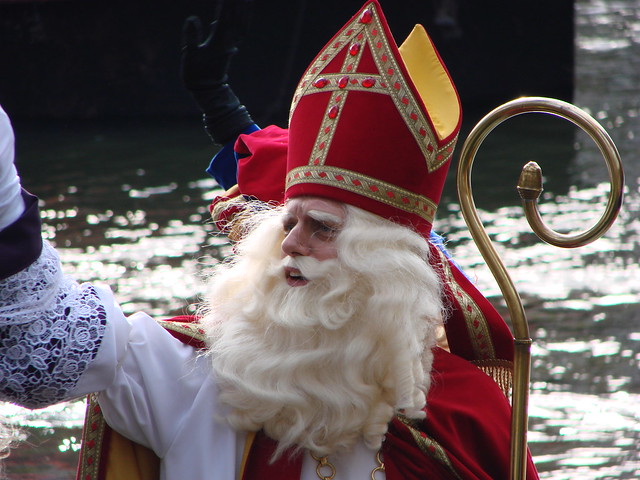 Today is St. Nicholas Day, when all the Sinterklaas celebrations come to a sugar-filled finale. I missed the Sint’s intocht (arrival) this year and I think I’m being punished for it with a cold that won’t go away. No gifts for me this pakjesavond, except maybe a neti pot. If you’re celebrating, I hope you get some lekkere pepernoten or kruidnoten or a chocolate letter. 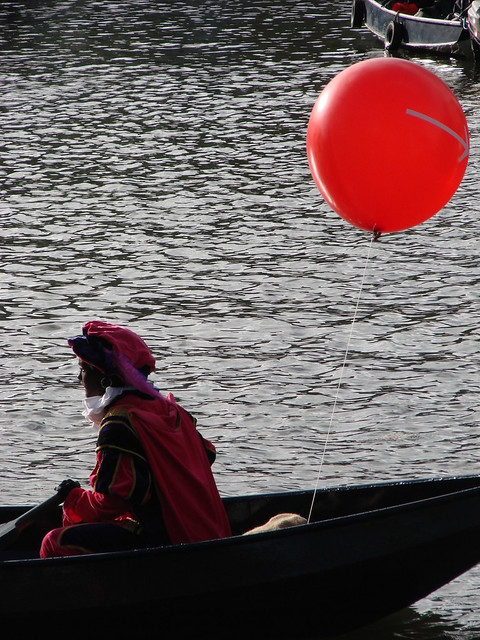 There will be lots of children shouting that on Sunday when Sinterklaas makes his arrival. Sunday is the intocht, AKA Sinterklaas’ arrival by boat from Spain.

Despite the recent issues with the canal walls near the Weerdsluis, it seems everything has been stabilized and Sinterklaas will be able to disembark in his normal spot. If the rain holds off, I may go see some of the festivities. The kid in me gets a kick out of it. Plus, it seems like a good time to get the first oliebollen of the season.

If you want to see the festivities in person, here’s this year’s schedule:
12.00 The boat parade begins at LedigErf
12.30 Weerdsluis festivities begin
13.00 Boats arrive at Weerdsluis
14.00 Begin the procession to Janskerkhof
14.30 Festivities at Janskerkhof

Sinterklaas arrived in the Netherlands today, thus beginning the holiday season here. For the next few weeks, kids will set their shoes out in hope of receiving chocolate letters, peppernoten, marzipan, and other treats and gifts. The big culmination is 5 December, pakjesavond, when more gifts are exchanged, after being elaborately wrapped in unusual packaging and a humorous poem accompanies each gift.

Therefore, the shopping season has begun. Know what would make a great gift? A special Utrecht calendar! You can roll it up and fit it inside a shoe, or a stocking, or wrap it up normally and put it under a Christmas tree. It could also make an excellent Hanukkah gift. The options are endless really. Fortunately, I know just the calendar. A year’s worth of photos of some of Utrecht’s loveliest (and humorous) spots. I carefully went through all of my photos to find just the right picture for each month, including a photo of Sinterklaas arriving in November! Enjoy!

I hope everyone has a nice pakjesavond tonight, although I suspect most people celebrated over the weekend. Still, today is the official celebration, so stock up on pepernoten, truffel kruidnoten and chocolate letters while they’re still available! I hope Sinterklaas is good to you. Pippo suspects he’ll end up in a sack and sent to Spain before the night is through. He figures he must have been bad to deserve this kind of embarrassment.

It’s that time of year again. Sinterklaas made his annual trip by steamboat from Spain to start his festivities here in the Netherlands. All across the country yesterday, Sinterklaas multiplied like Tribbles and made his grand entrance up and down canals, ports and rivers.

In Utrecht, he made his journey up the Oudegracht canal before disembarking at the Weerdesluis to then proceed on his trusty steed, Amerigo. From there they paraded through the center of town, heading to the Domplein and other locations, strewing pepernoten everywhere he and Zwarte Pieten went.

For the next few weeks, until December 5, there will be a run on carrots and chocolate letters as kids and parents make the nightly exchange: kids leaving carrots in their shoes for Amerigo, and Sinterklaas leaving behind chocolate letters, pepernoten, and other small treats for the kids.

I keep meaning to buy some klompen (wooden shoes) for our furry kids to set out for Sinterklaas. After all, human kids aren’t the only ones that go see Sinterklaas’ arrival.

It’s a good thing I went on foot yesterday to see the arrival. The city was packed and traffic was a nightmare. Parking was particularly tough. Even the city’s many squares, both small and large, were converted into parking lots for the day.

Saturday afternoon we stopped in briefly at Café De Stad in order to attend the presentation of the 2011 Waar In Utrecht (Where in Utrecht) calendar. Waar In Utrecht is a quiz in which a photo of a location in Utrecht is posted either on Twitter or through the website — or is part of a calendar — and the player has to guess where that spot is located. It’s player-driven, in that the person who guesses correctly via Twitter is then the one to supply the next photo. There’s usually some small prize such as a free ice cream or stamppot for the Twitter version, and a variety of prizes for the calendar version (a new photo each week).

I’ve played — and won — a few times, and now it seems that one of my photos made the final cut for the 2011 calendar. The quizmaster/organizer e-mailed me last month to see if I had any Sinterklaas photos that he could use, and he found one of mine that he thought would work. I was pretty sure the photo had made it in to the calendar, but got my final confirmation this weekend when I saw this photo. That’s my photo of Sinterklaas! (Appropriately, Saturday was also the day that Sinterklaas arrived in the Netherlands. Unfortunately, I missed the arrival this year. Someone else will have to supply the photo for 2012.)

Alas, the calendar presentation party was packed, and we couldn’t stay long, so I didn’t get to buy my copy of the calendar. I’ll just have to order mine online, most likely. But at least I can say I was at the same party as Utrecht’s mayor. Burgemeester Wolfsen was the first recipient of the new calendar.

A bit late, but I hope everyone has a fun pakjesavond tonight!

Sinterklaas arrived in the Netherlands from Spain today. We headed over to see his arrival, along with seemingly half the population of Utrecht. He’s a popular man with screaming fans.

Zwarte Piet was also in attendance, seemingly in record numbers. There were boatloads of them! Maybe Spain’s unemployment numbers will drop after this month! 😉