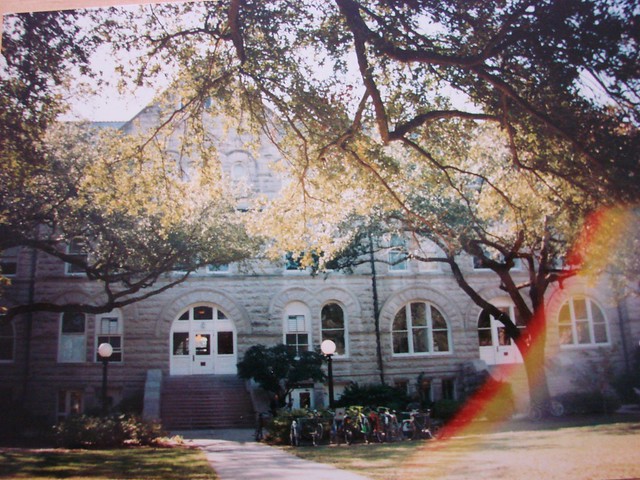 This Sunday, come rain or shine — just like Mardi Gras — I’m gonna laissez les bon temps rouler! Utrecht is getting its very own Klein New Orleans (Little New Orleans) for one day. Breedstraat is going to be turned into the French Quarter with food, music, and more that brings to mind the Big Easy. I can’t wait! I went to Tulane University in New Orleans (pictured above) and fell in love with the city. Sure, there’s a lot of corruption and crime, though that’s sadly nothing new. But there’s also so much passion and beauty and fun and a certain joy that’s maybe that little bit more intense because of the darkness that lurks, be it crime or Mother Nature. Certainly, when it comes to music and food, the city is exceptional. I’m not gonna lie, I’m a little worried about how the food is going to be translated at the festival this Sunday. I’ve seen a jambalaya at a restaurant here in Utrecht that was nothing like any jambalaya I ever had in New Orleans. But hopefully I’ll be pleasantly surprised. 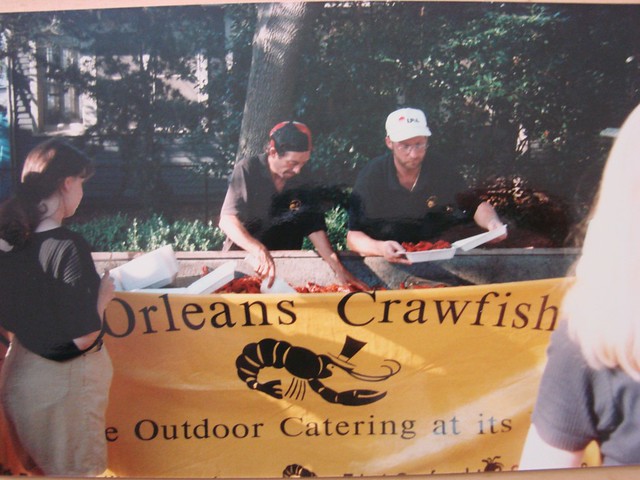 When I graduated, there was a crawfish boil for graduating seniors and their family. Crawfish, potatoes, corn on the cob. Suck the heads, squeeze the tails! I’m definitely looking forward to some crawfish this weekend! I wonder if they’ll have any Abita beer? Oh, and red beans and rice! And pralines! And beignets! Po’ boys! Gumbo! *sigh* Hmm. I just looked at the program and I’m not sure if they’re going to have any of that, except the gumbo. Oh dear. If they do this again next year, maybe I’ll sign up to make a big ol’ mess o’ red beans and rice, at least. 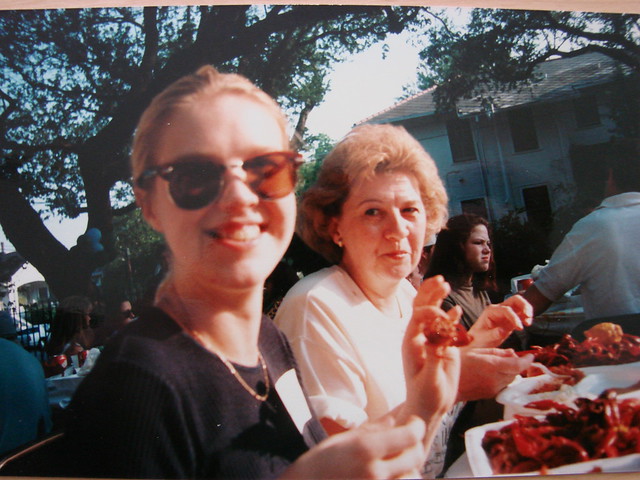 Well, I’m certainly looking forward to the music. If only they could have gotten Cowboy Mouth there. Seeing them live is like a religious experience. Though there is going to be a band there called the Neutral Ground Brass Band. The name alone makes me love them already. (Neutral Ground is the New Orleans word for a median, or that little strip of land in the middle of the street.) Reverend Shine Snake Oil Co. also sounds like it could be a good one. It also looks like they’re going to Second Line it over from Neude. Maybe I should decorate one of our umbrellas! In the meantime, I’m just going to look through some of my old photos from Tulane and reminisce. I can’t really share most of them without getting a lot of people to sign wavers. I am so glad we didn’t have camera phones back then. I do have a few photos I can share, starting with one of the classic streetcar; the house I lived in my last year, complete with porch (and yes I did stand down below and yell, “Stella!”); a postcard of some of the gorgeous wrought-iron balconies in the Quarter, and a silly picture of me after graduation. 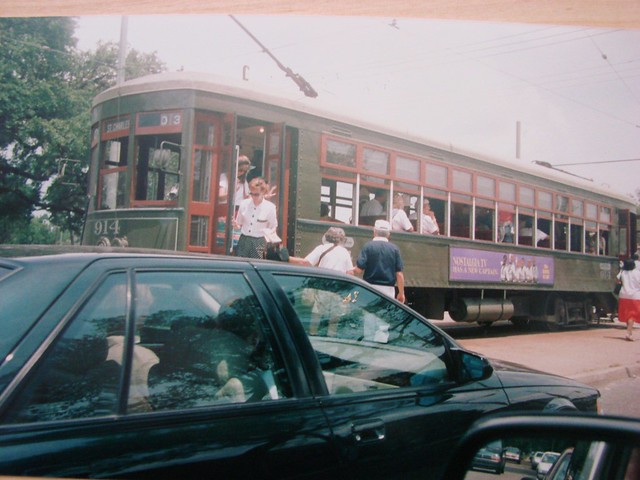 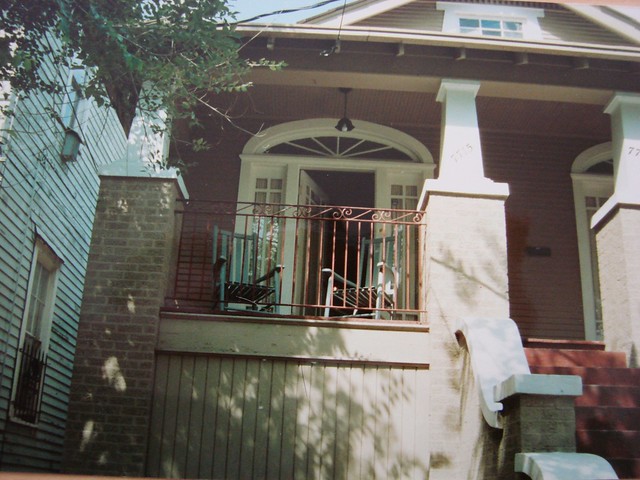 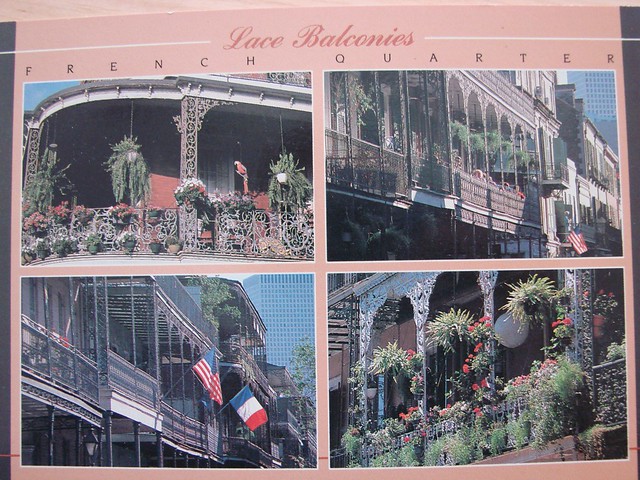 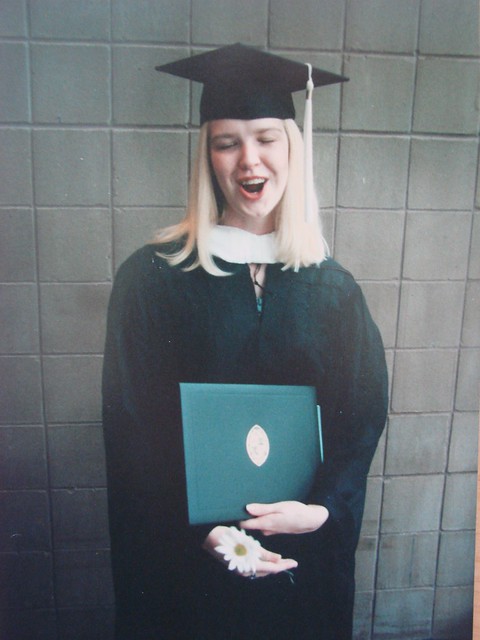 I’m not a huge sports fan. I tend to watch the occasional football (soccer match) if it’s FC Utrecht or a national team that I like. I also watch the occasional American football game, usually because of G. Tonight, we’ve been watching Tampa Bay Bucs vs Chicago Bears. (The game being played in London.) As a Floridian, I naturally cheer for any Florida team, especially the Bucs, having been a fan since I was little. That said, Chicago has a player from Tulane University, my alma mater. Matt Forté was the second round draft pick in 2008, and he’s also a legacy player/student, since his father also played at Tulane. He’s a damn good player and I find myself somewhat happily cheering for Chicago, despite the fact that they are playing for the one football team I’ve supported for close to 30 years.

I remain stunned that Forté even played at Tulane. We’re an excellent academic university, but not known for our football play. As good a player as he is, I would have expected him to end up playing at a university better known for its football. I’m not complaining, though. It’s nice to have a fellow Tulane alum making some news — other than freakin’ Newt Gingrich. (He got his BA from Emory — my second choice — and his MA/PhD from Tulane.)

I’m feeling particularly nostalgic for Tulane, since this weekend was Homecoming weekend. I’d love to make it back for Homecoming 2014, my 20th anniversary of graduating. Go Green Wave!

This post — and any nonsensical writing — brought to you by a miserable cold.

Now, look closely at that glowing spot in the middle of the photo. That, my dear readers, is the Space Shuttle Discovery on its launch in July 2005, as seen from the shores of Daytona Beach, Florida. We were there for less-than-ideal reasons, but I’m glad I got to see one last shuttle launch. I grew up in Orlando in the 1970/80s, so it was hard to miss the thrill of the Space Shuttle launching each time. It was still new and exciting, and it was also close enough that we could see the shuttle and its smoke trail in Orlando, even though it was launching down in Cape Canaveral. In 2005, we were in Daytona, where my grandparents had lived, so we went to the beach to watch the launch, as did many other people.

Today, when the Space Shuttle Atlantis lifts off for the last time, it will be piloted by Doug Hurley, who graduated from the Tulane University School of Engineering in 1988. I am also a graduate of Tulane University (Newcomb College, rather than School of Engineering), so I’m proud that one of my fellow Tulanians will be piloting the last flight of the space shuttle program. For me as a Floridian and a Tulanian, it’s a nice bit of symmetry.

No, no. That’s not tears. I just seem to have something in my eye.