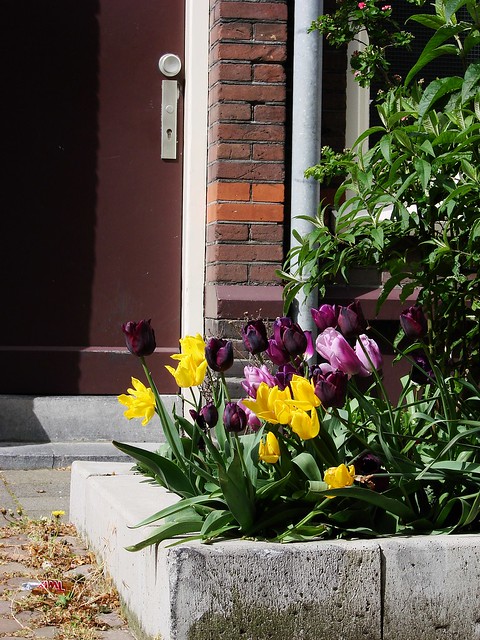 I’m in a lousy mood for no reason, so I’m trying to focus on the positives of this week.
First off was a lovely walk with Pippo last Sunday. While out and about, I saw this cool bit of graffiti.

On Wednesday, I got to meet up with A Georgia Peach and catch up and just generally have a lovely time while sitting on the terras at the Vismarkt on the Oudegracht.

On the way home, I picked up some more purple tulips to cheer things up. Gotta love getting four bunches for only €5!

And finally, to go along with the beautiful blue skies and spring weather, there were some really pretty cloud patterns this week.

Wait! I’m going to add some words after all. It turns out that today is Boomfeestdag, which no, is not a day celebrating explosions. Boom means tree, and today is a day when many new trees get planted at various locations. Utrecht’s Griftpark has been the recipient of new trees for the past few years, including this year. It’s a national, annual event, and fortunately, we’ve got perfect weather for it today. So, happy tree day!

Happy Koninginnedag! Queen’s Day is upon us once again, and so far this one, our third, looks to be excellent. Fine weather, no hangover, no tragedy … The music has started back up already, and will probably go all day. It started last night and ran until after 1 a.m. Last night’s performances included a country/rockabilly group, who also did a reggae song called “I’m Allergic to Ganja”, which they amusingly/weirdly pronounced ganya. I know that’s the Dutch pronunciation of -ja, but the song was in English, so I was expecting the English pronunciation. It made me laugh, anyway. There were also a band doing ’80s hits. They ended, not surprisingly, with Golden Earring’s “Twilight Zone”. For those not aware, Golden Earring is a Dutch band.

Anyway, we’re off to wander around and check out what’s being offered at the Vrijmarkt, an open flea market of sorts that is going on all across the country. I got some nice mugs and a royal tin the first year. If nothing else, it will be a slight break from all the music. We’ve just been serenaded by a band doing Dutch country of sorts. We’ve heard variations of “Jolene” and now I think they’re doing a version of “Islands in the Stream”. It’s interesting.

I never did get around to posting my photos from our visit to the Keukenhof this year. Since I haven’t been out taking a lot of photos around town recently, I figured I’d dip into that pool then and post one for today’s Photo Friday. I love these tulips that look like they’ve each been hand-painted. Mooi!

I had plans for posts this week, but I got sick Tuesday night with an awful stomach bug that’s not quite gone away yet, leaving me with no energy or patience for blogging, despite the ton of Keukenhof photos I have and other thoughts and ideas. Still, I hate to miss a Photo Friday, so here’s one of the photos from our visit to the Keukenhof. Maybe tomorrow I’ll get around to posting more about our trip to the famous gardens.

I took this photo last year at the Florahof over by the Domplein. The tulips are starting to show up more and more now as spring is making its arrival. The Keukenhof is now open and runs through May 16, so I’m definitely going this year while my parents are visiting. The theme for this year is From Russia With Love, with an emphasis of Russian-style gardens and such. The wife of Russia’s president was there with our Princess Maxima to open this year’s Keukenhof.

My pink tulips finally gave up the ghost this week, but I think I’ll go to the bloemenmarkt (flower market) tomorrow at Janskerkhof and get some new ones.

I seem to have developed a bit of a cough today. I’m hoping it goes no further, as I really don’t want a cold right now. But as I’m feeling a bit under the weather, this week’s posts may end up being photo-heavy/word-light.

Merian and I had been discussing flower vases and such last week, so when she came by on Friday before we all went to see Eddie Izzard, she surprised us with a lovely selection of vases, and lots of tulips to put in them all. It’s been lovely having this bit of brightness to cheer up the place amid all the cold and rain we’ve been having.