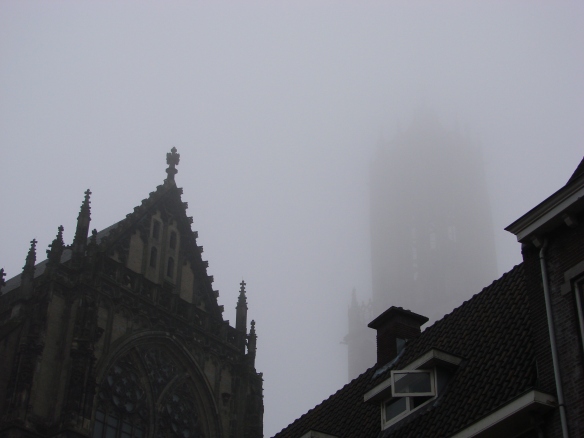 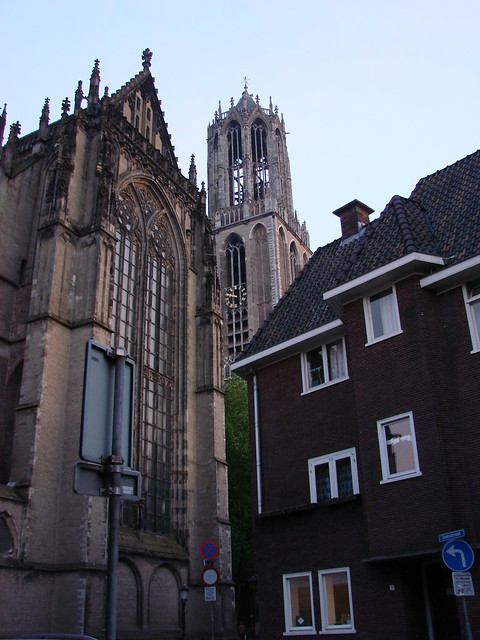 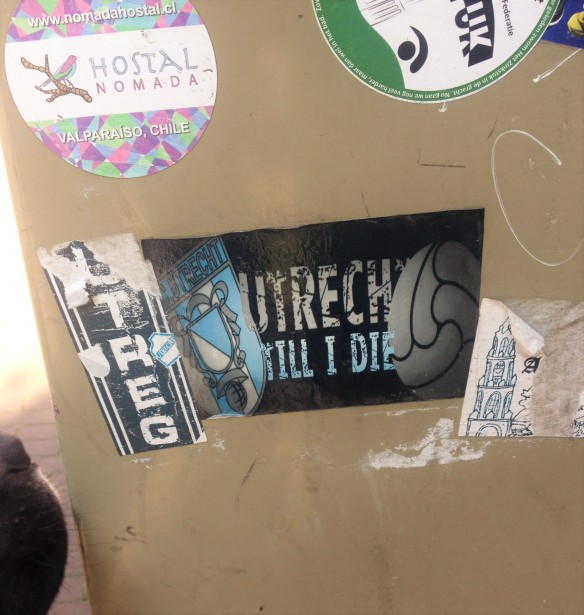 Hi! It’s me again. I haven’t been doing anything interesting, so there’s been a lack of drive to post anything. This post, though, is all about the potential to finally get some content for this blog again!

There’s a new exhibit at the Centraal Museum that I’m really excited to see. It’s all about the Domtower and the rich history of what has become a symbol of the city. In fact, Domstad (Dom City) is one of the city’s nicknames. Utreg, as seen in the picture above, comes from the local dialect (don’t forget the G is more of a guttural sound and not that far off the “cht” sound in Utrecht). When I eventually get to see the exhibit, I’m sure I’ll post about it.

What you see in the photo here is some sort of power/who-knows-what box along Nobelstraat that is covered in stickers. Charlie (giving it a sniff in the picture) and I couldn’t help but stop and appreciate the city pride in this batch of stickers, not to mention the international flavour. Too bad part of the sticker on the right is gone, but you can still see the ever-glorious Domtoren.

Speaking of which, the Secrets of Utrecht page on Facebook is doing a contest this week. They’ve posted various pictures people sent in of the Domtoren and the photo with the most likes will win two tickets to the DomUnder exhibit that is literally underneath the Domplein. DomUnder opened a couple of years ago, but when I tried to see it while some friends were visiting, it was fully booked. Since then, I haven’t gotten around to going. I’ve been planning on going soon, and winning the tickets would offer the extra impetus to go, plus I’m more likely to get G to go with me.

So if you don’t mind going to the post with my picture of the Domtoren and “liking” it, I’d be ever so grateful. Plus, it’s something else that I’m sure to write about once I’ve gone. Content! Real content! Two thousand years worth of content, in a sense. Romans! Tempests! And so much more!

A friend of mine came for a visit yesterday, but before meeting up with her, I took Charlie out for a walk to try to make up for the fact that I was going to be gone all day. We’d had a very light dusting of snow during the night, but nothing to make walking around treacherous. We had the added benefit of some glorious sunshine, but that’s more relevant to the photos I took later in the day.

Anyway, as Charlie and I were wandering around, I decided to finally go in search of the Camera Obscura I’d seen recently on Instagram. This house on the Kromme Nieuwegracht once belonged to photographer Frans Ferdinand van der Werf (1903-1984). He settled in Utrecht in the 1930s and became well-known for his photos that ranged from comic scenes in the city to the liberation of Utrecht by the Allies.

There is currently a free exhibition of his work at the Utrechts Archief, which is running through 21 May. I suppose I’ll have to leave Charlie behind again for that one, but I really do want to see the exhibit. Maybe I can get some fresh photography inspiration. 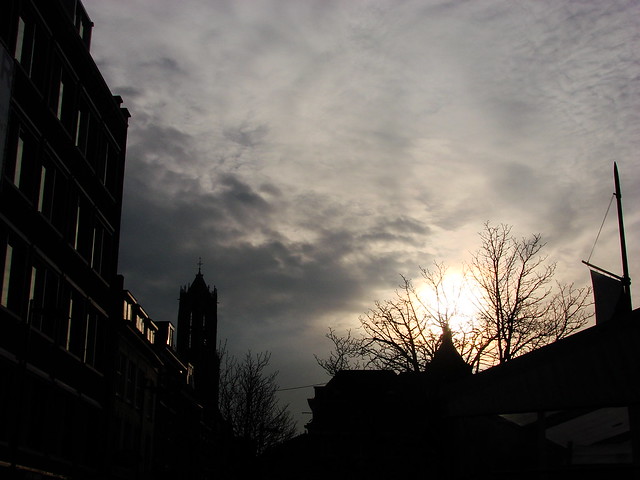 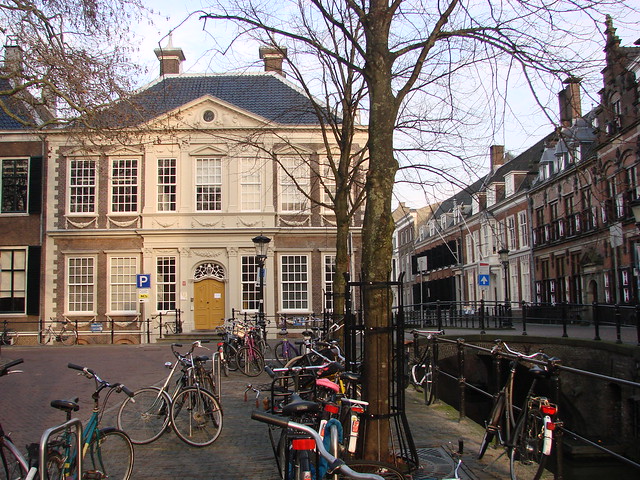 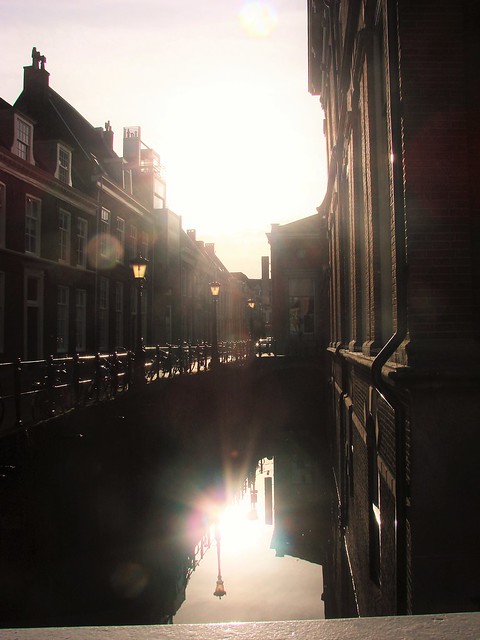 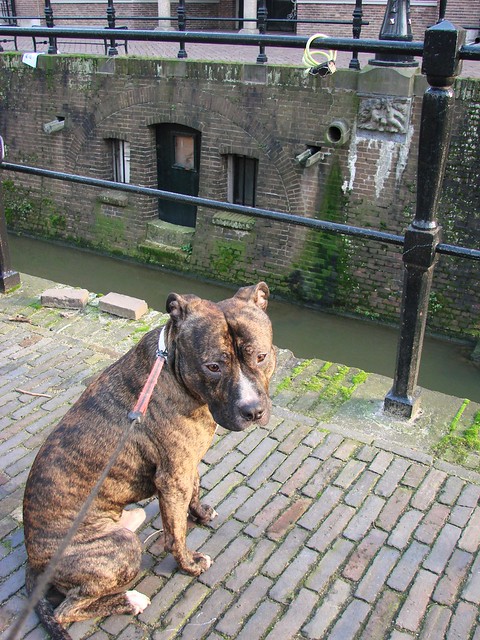 I used to do a weekly Foto Vrijdag (Photo Friday) thing, but that morphed into Wordless Wednesday. Maybe now I’ll do both. This was a reflection of the Domtoren and part of the Pausdam in a window early this morning. Another bright, blue sky, autumn day. 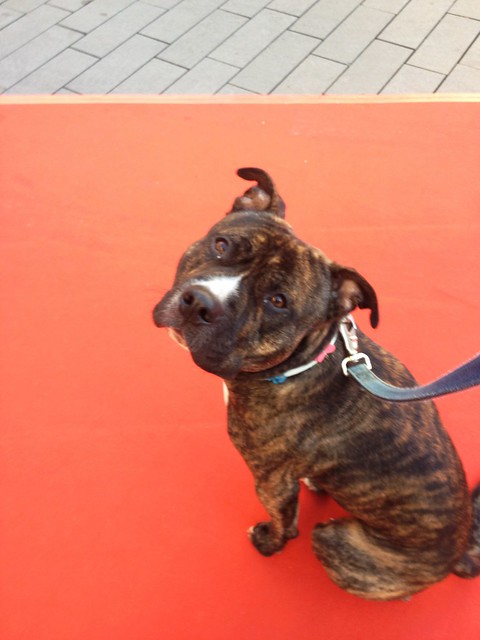 So, a few of you noticed that I haven’t blogged in quite a while. I appreciate you reaching out and apologize for not responding directly. I’m ok, but various things meant that I had no desire to blog and didn’t really want to talk about it all. I’m still not sure how much I want to get back into blogging. Right now it feels like a lot of work on top of my actual work. But I do have a reason to get out and about a bit more now, so if nothing else, I’ll hopefully have photos to post!

I’ve missed having a dog to go on long walks with regularly, so a couple of months ago, I started searching for a new canine companion. It was surprisingly difficult, mainly because of our two cats. Finding a dog that could live with cats, get along with other dogs, and stay home alone for a few hours was a surprisingly big ask. A few times, we thought we’d found a dog, but it would either be adopted before we had a chance to see him or it turned out he wasn’t ok with cats or something or other.

Finally, last week, on my daily searches of various dierenasiel (animal shelter) websites, I came across a Staffordshire terrier who sounded like he would be a good fit. After exchanging a few emails with the shelter, it seemed like things could work out, so we asked them to reserve him for us until we could get there on Monday. (They’re all closed on Sundays and our weekends are Sunday and Monday.)

So yesterday morning, we headed out to Rotterdam to go see about a dog. I’m going to give you the condensed version as he’s currently trying to use my arm as a chew toy and sticking his big head up under my arm. Obviously, we got him. He’s only one year old, so he’s still got a lot of puppy enthusiasm. But he’s wonderful on walks! Not so great in the car, though. We knew he had the potential to be car sick, but we managed to get all the way to Utrecht, just minutes before we were home before he decided to be sick. Of course. Since then, we’ve been to see a few sights around Utrecht, though his selfie game needs work. He found a Nijntje yesterday. 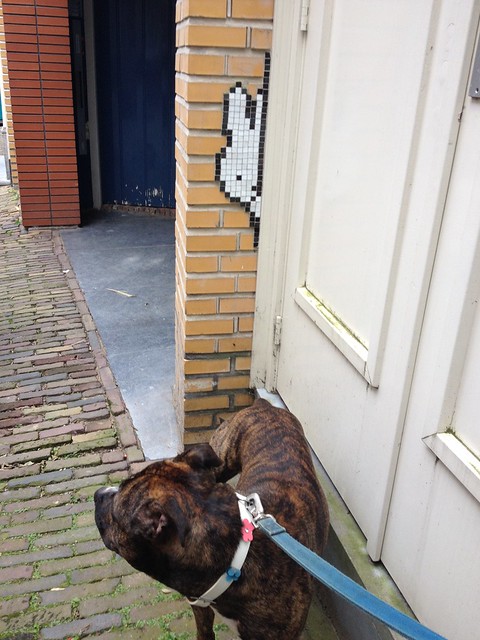 He took a tour through the Pandhof at the cathedral. 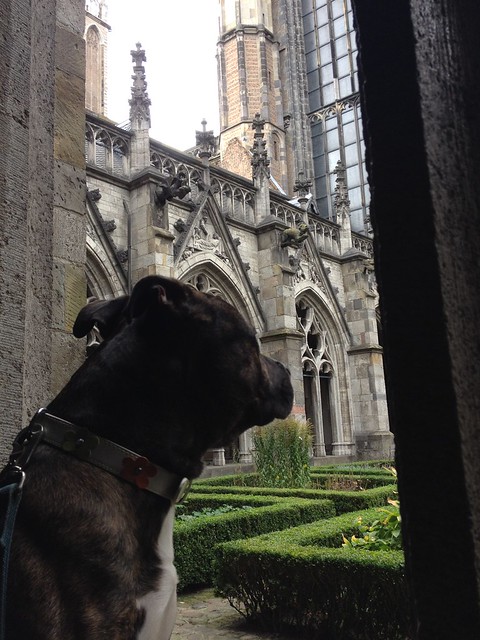 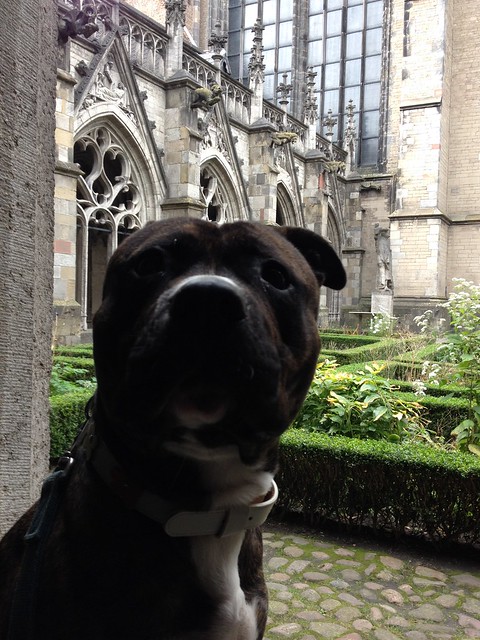 And today he took in some 3D chalk art by the Stadhuis (more on that tomorrow). 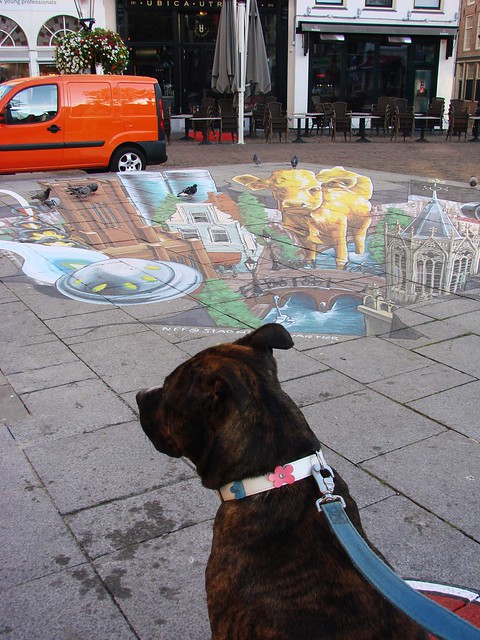 After that mini wrestling match a few minutes ago, he’s now passed out on the sofa next to me, snoring away. He’s a big snorer.

As for the cats, he’s been fine with them, just curious. They, on the other hand, are not happy. Luna’s dealing better than Lola, which is funny, since Lola is the one who used to follow Pippo around everywhere. Oh well, I’m sure she’ll come around. 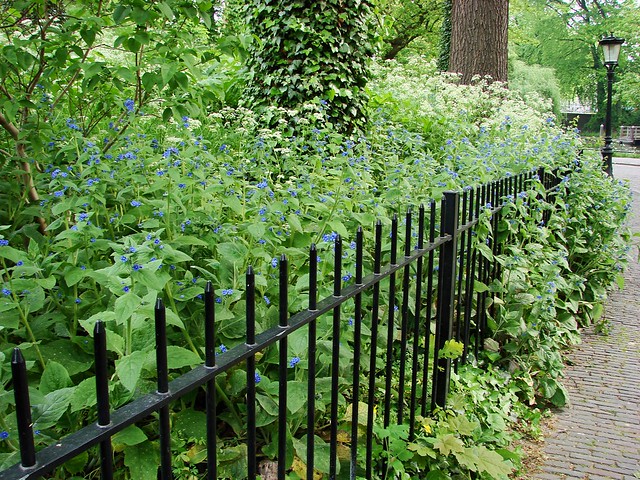 This week’s photo challenge theme is spring in all of its many glories and charms. For me, spring is the return of walks around the city, admiring all the little nooks and crannies that come alive with greenery and blooms, both wild and intentional. Crocuses, tulips, and daffodils spring up in abstract masses in almost every grassy area surrounding the old city center.

On a recent walk, I was blown away by the profuse greenery surrounding the Lievendaal villa. The shade of the trees, the intensity of the green, and the pops of blue from tiny flowers turned this little corner into a verdant wonderland that doesn’t seem like it will truly be contained by the wrought-iron fence. 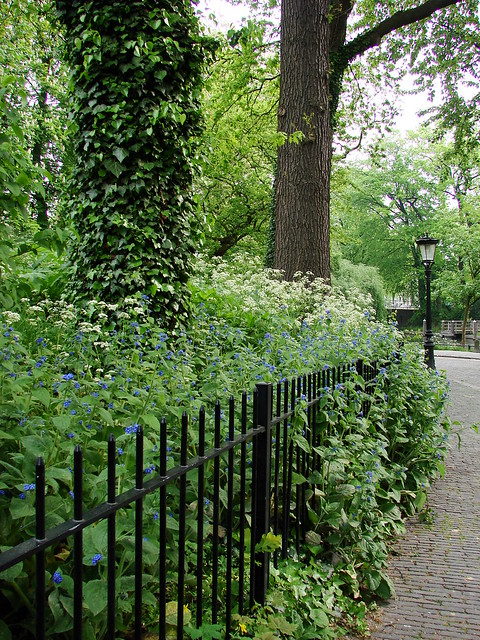