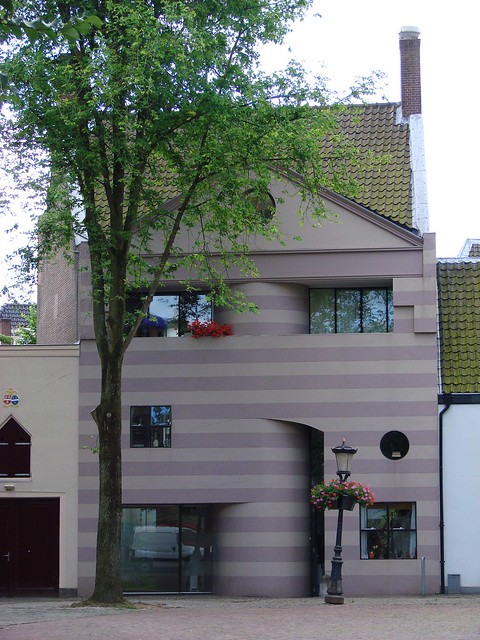 The first time I wandered into Pieterskerkhof, a cul-de-sac-like area next to one of the churches in town, my eye was drawn immediately to this unusually modern, striped building set amid a wealth of traditional Dutch brick homes and buildings. I was dying to know more about it and see what it looked like behind those atypical stripes and smooth forms.

Eventually, I came across a mention of this building, known as the Van Schijndel House. Over the years, the home has occasionally been opened to the public as part of a few special tours, particularly on the annual Architecture Day organized by AORTA. Yet year after year, I’ve managed to miss this day and particularly this tour. This year is no different; it was just shy of two weeks ago.

Since it seems I am never going to see inside with my own eye, I can be grateful that local writer and architecture enthusiast Arjan Den Boer recently wrote an informative article on the house. It is in Dutch, but you can get the gist of a lot of it using Google Translate, if you’re interested. I highly recommend clicking through to the article so that you can see some of the interior photos. It’s a stunning mix of light, space, and unusual angles, not to mention a few of my favorite Utrecht chairs by Rietveld.

To sum up briefly, architect Mart van Schijndel bought the property in 1988. At the time the buildings were being used as a garage and a graphics studio, though much of the entire closed-off neighborhood was in a questionable state of repair, with junkies hanging out in back corners and cars still being parked in the various garages. In the past, many of the buildings had served as coach houses for the more wealthy homes along the Kromme Nieuwegracht canal nearby. (The linked article has a photo of the buildings from 1974.)

Van Schijndel was a post-modern architect, but he appreciated classical architecture and included some light-hearted references to more traditional architecture, including the pediment. In fact, the building is really more modern than postmodern.

The focus seems to be on light and air with glass walls and open spaces, though you almost never look out at the city, only up to the sky. There are two patios to ensure there is always one to be enjoyed, no matter the time of day. There are also no purely white walls, though they may appear white at first glance. All have different tints to make the most of the light they receive throughout the day. Even the ceiling has a tint of red to capture the summer evening atmosphere.

The interior cabinets, doors and other features were just as carefully designed as the overall structure of the building. It’s no surprise that it won the Rietveld Award in 1995. Sadly, Van Schijndel died in 1999, but his wife, Natascha Drabbe, an architecture historian, remained. She has worked to preserve her late husband’s architectural heritage and does organize lectures, tours, publications, and has set up an international network of Iconic Houses, of which the Rietveld-Schroëder House is naturally a member.

The house and the architect’s stunning vision will live on. In 1999, the home was named a municipal monument, the youngest such monument in the country. It does seem that there are now tours by appointment on the first Sunday of every month. If you’re interested, you can contact info@vanschijndelhuis.nl. Maybe I’ll manage to see the inside of the house yet! 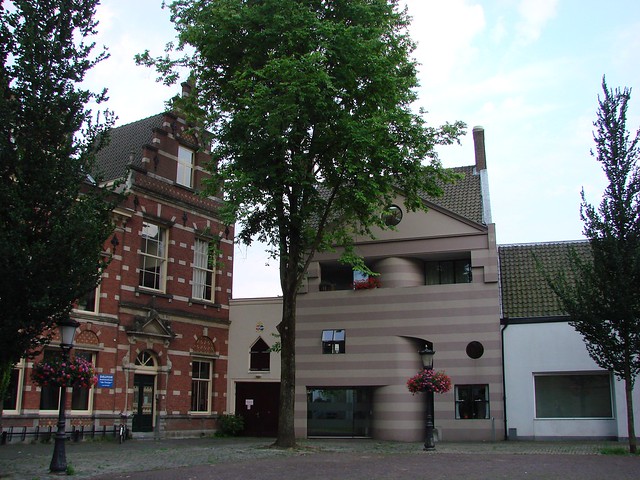