(photo via Het Utrechts Archief)
This photo from 1959 shows the Janskerkhof during one of the weekly Saturday flower markets. That aspect hasn’t changed at all and it’s a stunningly beautiful spot to hold a flower market. In the shadow of the church and the trees throughout the square, the flowers in the market are just gilding on this historic space.

I love the hustle and bustle and bursts of color that fill the space on Saturdays, but I also love the serenity of the area on a quiet Sunday morning, when the only remains of the market are a few fallen flower petals and a new bouquet at the feet of the Anne Frank statue in front of the church. My present-day photos were taken on one of these quiet Sunday mornings. To be honest, I was interested in the row of bikes and the scooter that day. I only saw the old photo of the spot recently and knew I already had a comparison photo. 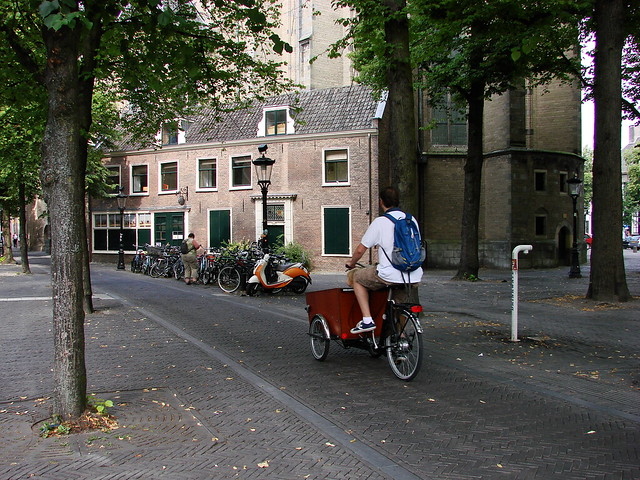 The area today looks much as it does in that photo from 1959, though they’ve gotten rid of most car parking in the square in recent years, though you will see the odd scooter. Even the lamp and bicycles look much the same, though the bikes now face the other direction to allow for a separated bicycle lane. Today, you’re just as likely to see people walking away with the same bouquets of flowers as cycling away, with flowers in hand, under the arm, or in bags or baskets. I can’t tell you how many times I’ve seen someone leaving the market with a small potted tree strapped upright onto the back of their bicycle. 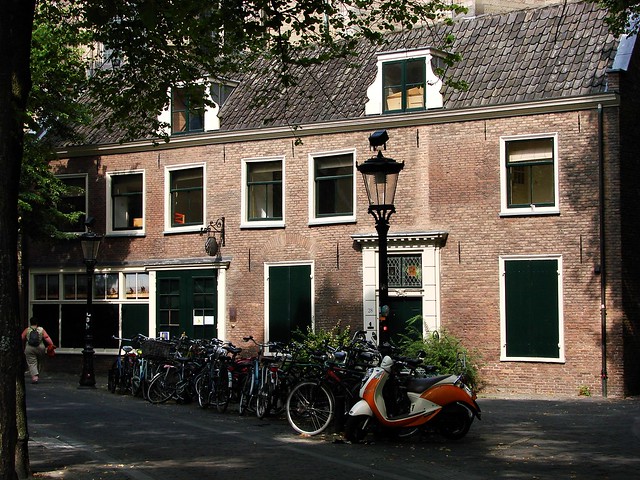 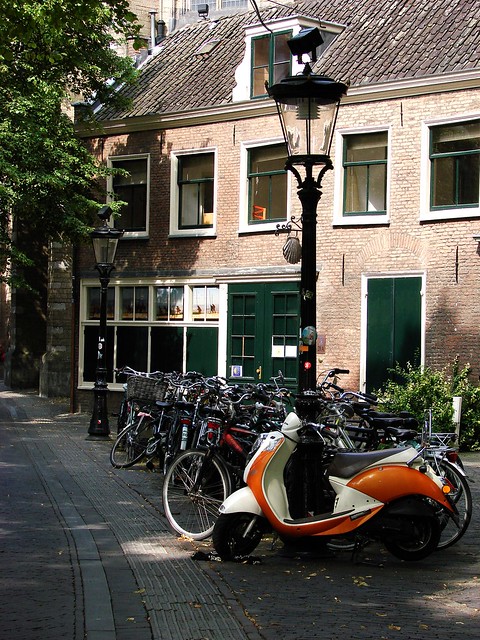 I’ve got a couple of blog post ideas, but they require a bit of research and I’m not in the mood after the editing I’ve been doing. Maybe this weekend I’ll be feeling more inclined. Instead, today, you get a few follow-up comments on some of the stuff I’ve mentioned recently.

For example, here’s a photo of one of the first Pyke Koche lamps to be renovated in the Domplein. The glass is now clear, instead of the frosted yellow it used to be, and yes, the red and white Utrecht shields are in full colour!

More embarrassingly, when I posted about the missing nave and the trompe l’oeil painting of the nave, I should have looked more closely at my recent photos. I might have noticed that the painting isn’t there anymore.

Talk about taking something for granted! I started going through my old photos to try to figure out when it was removed, but I can only narrow it down to sometime between January and October 2011. Yeah, last year. As I said, embarrassing! I’m hoping someone else can help me out and let me know when it came down, just for curiosity’s sake. I think they should put it back up, though.

Finally, hartelijk gefeliciteerd met je verjaardag, Nijntje! (Happy Birthday, Nijntje/Miffy!) The little rabbit, who was the creation of local artist Dick Bruna, is celebrating her 57th birthday this weekend. She’s become famous around the world since then, and has her own square (Nijntje Pleintje) here in Utrecht. If you’re in town, I’m sure there are festivities at the Dick Bruna Huis across from the Centraal Museum.

Check out the Utrecht Events Calendar for some of the events going on this weekend. I’m about to update it with tips for architectural events, the 200th anniversary of a street, and a human peace sign.