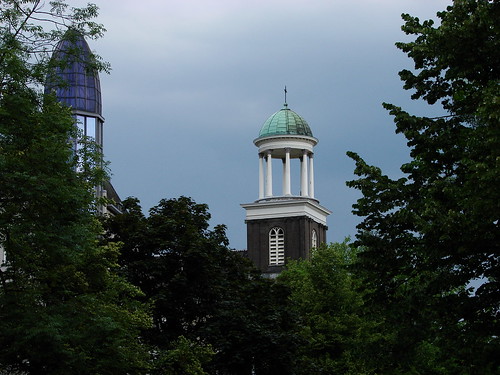 Good ol’ Dutch weather. Sometimes it changes from one day to the next, other times it changes from one minute to the next. Mercurial easily defines the weather of the past few weeks in Utrecht, when we’ve had a stunning mix of sun and clouds, often at the same time. Today we’ve got ridiculously high winds that even managed to open our front door! (The locks are now firmly in place.)

We’ve had quite a few days of clear blue skies, without a cloud in sight, which are always a joy to see. 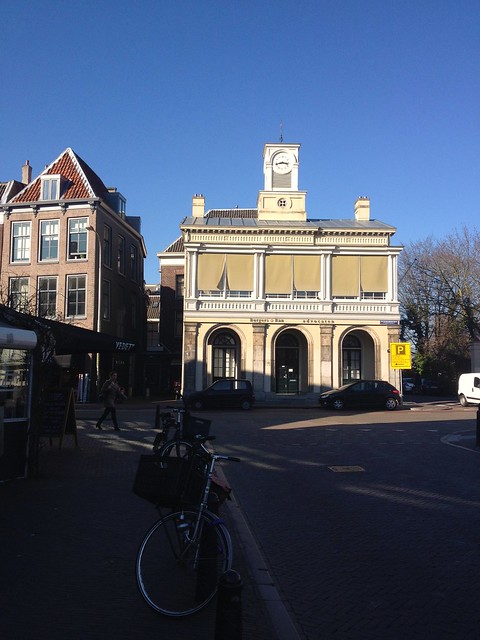 And then we’ve had days with apocalyptic clouds paired with crisp sunlight. 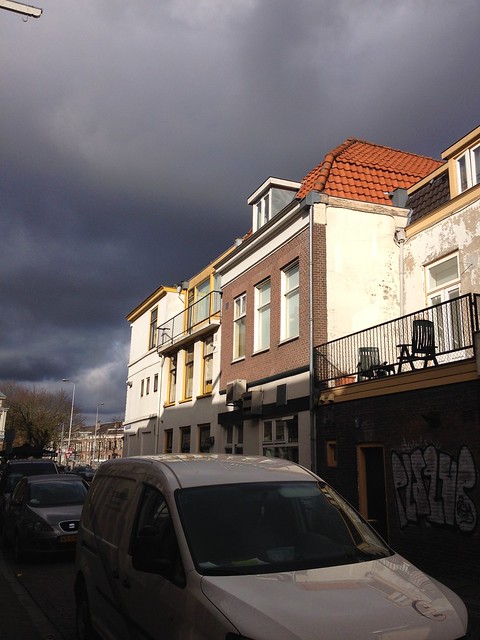 Sometimes you get a mix, depending on whether you’re looking east or west. These two photos were taken seconds apart in front of our restaurant on Biltstraat, looking right (east) and then looking left. 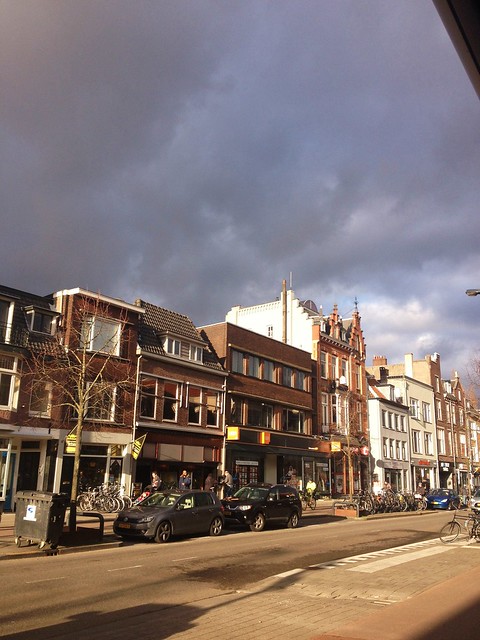 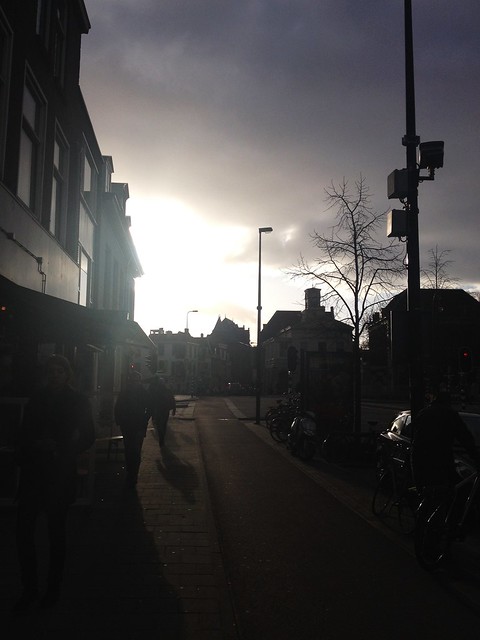 And when you start to get acclimated to the bizarre weather and think you won’t see anything strange, nature pulls another trick from her sleeve: the banana bush! 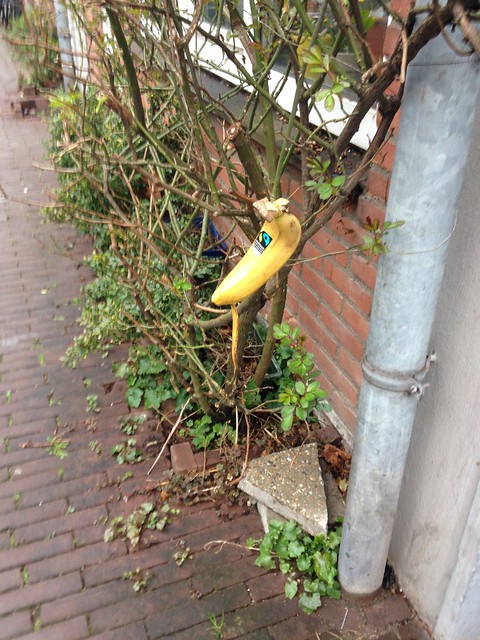 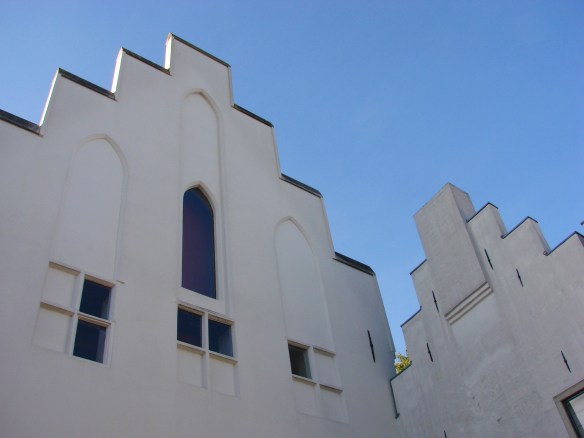 It’s that time of year again when the skies are grey and rain shows up in the daily forecast. In other words, the weather vacillates between meh and miserable. I really should get one of those sun lamps, but until I do, I’ll tide myself over with pictures of crisp blue skies (and pretty buildings). 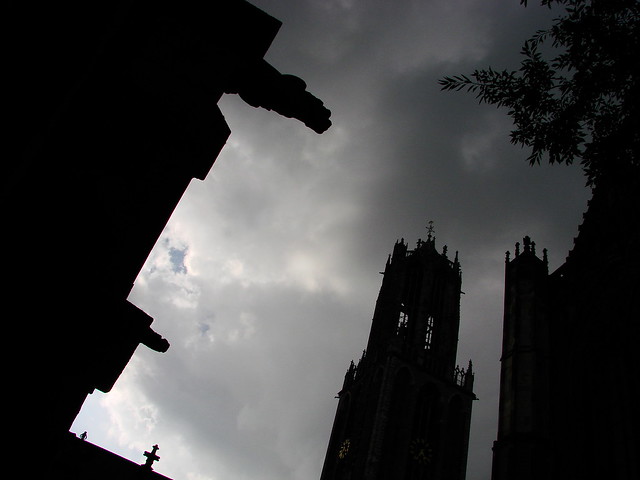 Whether you’re religious or not, Fridays are generally pretty good. I still have work to do this weekend, but I’m still happy that it’s Friday for some reason. Sadly, our weather isn’t so good. It’s been overcast much of today and looks to be the coldest Easter in at least 50 years. Though a White Christmas may be charming, a White Easter, not so much; yet there’s the possibility of snow in some areas. We’re also doing the time change this weekend, although if lots of people are getting Monday off, that might help with the adjustment. I’m not sure what it will do to my own frequently screwy ability to sleep; I’ll have to wait and see.

All of this is a rambling way of wishing you a Vrolijke Paasdagen (Happy Easter). Don’t forget, you’ve got through Sunday to leave an awesome comment for me at the Expats Blog writing contest. I’d send you chocolate eggs as a thanks, but I think I’ve eaten them all.

ETA: Moments after posting this, it began to snow here. Still coming down. Is this an early April Fool’s joke?

This was taken before the snow came, but is representative of how much of the city seemed to look. With all of the rain and mild temperatures we’d been having, everything had gone a bit green. The Domtoren was covered in mossy green splotches, and the Nieuwegracht, seen here, was starting to look like the wharves were made of grass, rather than brick. I’m not sure if the snow and freezing weather will have any impact, or if we’ll simply return to green when the white has disappeared. Still, I suppose it adds a nice touch of colour during the otherwise grey winter months.

Sorry for the blog silence this week. I’ve been a bit caught up in some other work and just couldn’t bear to try to wrangle any more words. I did head out today to get some more gargoyle photos and couldn’t resist a few cloud photos, as well. It wasn’t quite as dark as the photo makes it out to be, but there was some impressive cloud coverage battling with the sun that was making a valiant effort to break through. The clouds won, but the show the two put on was worth seeing. Of course, I have a fondness for a nice natural silhouette like this. Hopefully, you do too!

After living here for four years, I’ve gotten fairly used to life here and don’t really notice some of the little differences any more. But every once in a while something catches my attention and makes me smile.

For example, the molen (windmill) in the photo is here in town in an urban area. It’s also where we went to buy some special cuts of meat, because the base of it is now a butchery. How many people get to go to a butcher housed in a windmill?

On the other hand, while visiting the kerstmarkt (Christmas market) the other week, we got to try a BBQ pulled pork wrap. The guy making the food had a large BBQ grill/smoker like the ones you see in the US at BBQ competitions, etc. Pulled pork isn’t common here, so as he was serving it up to us, he asked if we’d ever eaten something like this before. I had to laugh. Actually, I thought I had misunderstood what he’d said, since we had been ordering in Dutch. It turns out I did understand him, but the question threw me for a loop. Growing up in the South, there’s no shortage of pulled pork. In fact, there are whole regional differences in how you cook and dress your pulled pork. For example, vinegar sauce vs tomato-based sauce.

The funny thing is, it’s not the first time someone has asked me that about a food I take for granted. While visiting a local baking supply shop that also sells some treats, they were giving away cheesecake samples and they asked if I’d ever tried it before. That one surprised me even more, but I guess it was new to enough people to warrant the question! I know my friends at American Baking Company have had fun introducing some American desserts to a Dutch audience, but they seem to be winning them over!

To finish off this look at small differences, I’m going to move away from food. This one isn’t particularly Dutch, but the constant wet weather makes it somewhat typically Dutch. We’ve had rain (more drizzles than heavy rain) for more than a week now. Every time I look out the window, if it’s not actually raining, the streets are still obviously wet. Every time I went out in the past two weeks, I’ve gotten rained on, except for the past two days. That just means I’ve gotten lucky.

The part that makes this somewhat amusing is the fact that our house, which dates to the late 1800s, gets temperamental with this much moisture. More specifically, our front door gets temperamental. It getting a bit sodden, I suppose, and doesn’t want to close properly. Once it is closed, it doesn’t want to open, at least not from the inside. Our front door also is a bit curious in that it doesn’t have a typical handle on the inside. There’s a latch on the lock that we usually use to pull the door open. However, when the door decides to stick, it’s hard to get a good grip on the latch.

For the past two days, when someone has come to the door (mainly delivering/picking up packages for neighbours), I’ve been physically incapable of getting the door open! I’ve been pulling on the latch with one hand and using the other hand to get an awkward grip on the mail slot in the door in an attempt to get enough leverage to open the door. In the meantime I was also calling to G for his help and was tempted to yell through the door to have the other person push!

If the rain isn’t going to stop, I’m going to need some rope to fashion a handle so I can pull more easily. At least we have a back door that works, although even the garden door is starting to get a bit sticky now!