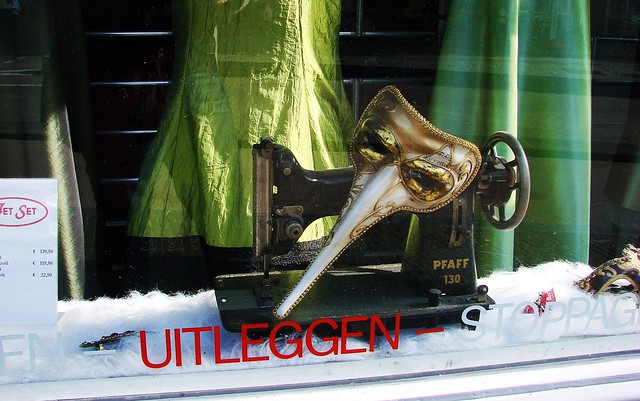 Last week it was free-range chickens; this week it’s bunnies growing on trees. There’s always something to make you pause in surprise!

Saturday, as we were walking along the Oudegracht, enjoying the misty but pleasant autumn weather, we were stopped in our tracks when we saw this tree. It’s not often that you see a tree draped in an assortment of fabric rabbit shapes.

I have no idea who put them there or why. I did a quick Google search and came up with nothing, other than the fact that one other person posted a photo of them on Twitter back on 17 October, so they’ve been around for a while.

Perhaps they’re the new variation on guerilla knitting. Guerilla konijnen? Whether they serve a greater purpose or are just meant to give passers by a smile, I’m glad they’re there. They’re just one of the many reasons I’m thankful to live in such a fascinating and lovely city. (That’s my subtle way of saying Happy Thanksgiving to my fellow Americans. We’ll be celebrating on Saturday, when I can get pecans for the all-important pecan pie.)

I’ve been looking for just the right fabric in those colors to either recover or embellish our currently white dining room chairs. No luck yet, but I found a way to bring a bit more of that color combination into our dining room by making a table runner with some fabrics I’ve had on hand for a while. I bought the floral print a few years ago in North Carolina, simply because I liked it, without any real plan for what to do with it. The blue is a cotton canvas I bought at the lapjesmarkt here in Utrecht. The bottom of all the circles is a light purple fleece-type fabric that I bought ages ago in New York City to make cat toys. Quite the cosmopolitan table runner, I guess!

I’ve had a variety of ideas of things to blog about, but then I got some sort of stomach bug this week and my plans went the way of the mice’s. I’m feeling better now, but it was a mental struggle just getting one Trippist post done today. I’ll hold off on the deeper thoughts I’ve had about learning the Dutch language until I’m feeling a bit more mentally alert.

In the meantime, I’ll (hopefully) amuse you with my latest crafty hobby. I’ve been making these little sarubobo dolls, just for the hell of it, since they’re fairly quick and mindless to make, although the tiny size makes them a bit more challenging. It’s also a good way to use up some of the small scraps of fabric that I have. Oddly enough, I just noticed that the blue ones are for luck with study and the green ones are for luck with health. I’m not sure the green one I made the day before I got sick helped. Hopefully the blue-ish ones I’ve made will help with my Dutch studies.

One of my other “hobbies” recently has been catching up with seasons 1 and 2 of the HBO series True Blood, which has just started airing here in the Netherlands on the Foxlife channel on Mondays. It’s a show about vampires living in Louisiana, not New Orleans, though. It’s silly and fun and recently had a great line about children. Vampire Eric referred to them as being small, like teacup humans! When I saw a screencap of the scene with one of the quotes, I figured I’d combine my two hobbies and have some fun with them. The result is this: